An Internet Designed for Space

You would think that Internet pioneer Vint Cerf would be too busy with the upcoming transition from Internet Protocol version 4 to IPv6 — not to mention his other duties as Google’s Chief Internet Evangelist — to keep an eye on space communications. But the man behind the Net’s TCP/IP protocols never lets the human future off-planet get too far from his thoughts. These days the long hours he has already spent on developing a new methodology that lets us network not just Earth-based PCs but far-flung spacecraft have begun to pay off. 2011 should be a banner year for what many have already begun to call the InterPlanetary Internet. 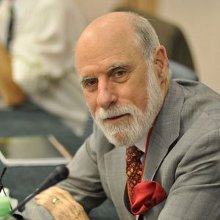 At issue is a key problem with the way the Internet works. TCP/IP stands for Transmission Control Protocol/Internet Protocol, and it describes a method by which data are broken into small data envelopes and labeled for routing through the network. When they reach their destination, the packets are then reassembled. We know how the Net that grew out of these protocols transformed communications, but for TCP/IP to work well, it relies on the fast turnover of data. The key tools are ‘chatty,’ exchanging data over and over again to function.

The classic case is File Transfer Protocol, or FTP, which takes eight round trips — that’s eight cycles of data connection — before the requested file can make its trip, and as anyone who has worked with FTP (especially in the early days of the Net) knows, FTP servers will time out after a certain period of inactivity. But if you’re trying to network spacecraft, you can’t work under these conditions. At interplanetary distances, speed of light delays add up, and latency that could make an Earth-based connection hiccough can quickly grow to hours and days.

The new Bundle Protocol that the InterPlanetary Internet project under Cerf’s direction has come up with takes care of this problem, compensating for all these delays. It’s part of the larger concept of delay tolerant networking now being overseen by the Delay Tolerant Networking Research Group, which ultimately grew out of the Internet Society’s Interplanetary Internet group, with Cerf at the thick of things all along. In a recent interview in Network World, Cerf noted that the Bundle Protocol has gone beyond theory into actual space operations.

You’ll find the new method, for example, running aboard the International Space Station. And delay tolerant networking protocols have been uploaded to the EPOXI spacecraft, whose most recent claim to fame was its visit to Comet Hartley 2 — this is the same vehicle, then called Deep Impact, that drove an impactor into comet Tempel 1 back in 2005. The new protocols have already been tested with a light-delay time of approximately 80 light seconds, and much more is in the works. Here’s Cerf on what’s coming up:

…during 2011, our initiative is to “space qualify” the interplanetary protocols in order to standardize them and make them available to all the space-faring countries. If they chose to adopt them, then potentially every spacecraft launched from that time on will be interwoven from a communications point of view. But perhaps more important, when the spacecraft have finished their primary missions, if they are still functionally operable — they have power, computer, communications — they can become nodes in an interplanetary backbone. So what can happen over time, is that we can literally grow an interplanetary network that can support both man and robotic exploration.

Networking our space resources is a key element of a space-based infrastructure. Right now, most space exploration has involved point-to-point radio links. When you wanted to communicate with a distant spacecraft like Voyager 2, you had to dedicate expensive radio dishes to that specific task. A system in which we can store and forward data among spacecraft lets us maximize our communications, letting multiple missions forward their data to a central node on the interplanetary Net for subsequent transmission to Earth. As space testing of delay tolerant methods grows, the Bundle Protocol is also in action in various academic settings and in NASA laboratories. The building of an interplanetary network backbone has commenced.