Ongoing Planet Formation in the Chamaeleon?

We recently looked at protoplanetary disks around the stars AB Aur and LkCa 15, new studies using adaptive optics at the Subaru telescope on Mauna Kea. Today we learn about another interesting disk, this one around the young star T Chamaeleontis (T Cha), about 350 light years from Earth in the southern constellation called the Chamaeleon. The star is a scant seven million years old and, as was the case with the Subaru studies, we’ve gained evidence for planet formation within the disk. The latest work, performed with the European Southern Observatory’s Very Large Telescope, has delivered powerful evidence for a small companion. Brown dwarf or planet? At this point, we don’t know.

T Cha is a T Tauri star, meaning it is young, luminous and too cool for hydrogen fusion to operate. Instead, the star is powered by energy released as it contracts for the tens of millions of years it will take to reach the main sequence. The Very Large Telescope used adaptive optics technology and a technique called sparse aperture masking (SAM) to find the companion object. SAM is a type of interferometry that excels at isolating faint objects that are close to brighter ones. The object was searched for at wavelengths of 2.2 and 3.8 microns, but could only be found at the longer wavelength, indicating a planet or a cool, dust-shrouded brown dwarf. 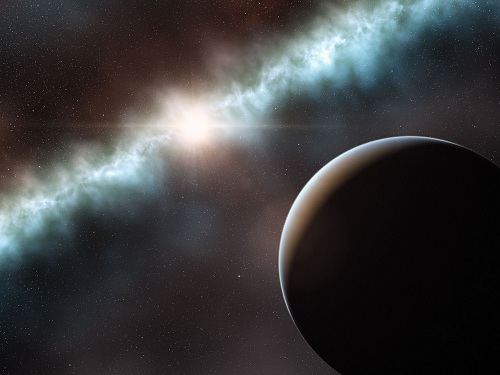 Image: This artist’s impression shows the disk around the young star T Cha. Using ESO’s Very Large Telescope this disk has been found to be in two parts, a narrow ring close to the star and the remainder of the disk material much further out. A companion object, seen in the foreground, has been detected in the gap in the disk that may be either a brown dwarf or a large planet. The inner dust disk is lost in the glare of the star in this picture. Credit: ESO/L. Calçada.

The inner ring of the protoplanetary disk detected around T Chamaeleontis is a scant 20 million kilometers from the star, with the outer region of disk material located 1.1 billion kilometers out and beyond. The companion object is found in the gap between the two disks. Says Nuria Huélamo (Centro de Astrobiología, ESAC, Spain), lead author of one of the papers on this work, “For us the gap in the dust disc around T Cha was a smoking gun, and we asked ourselves: could we be witnessing a companion digging a gap inside its protoplanetary disc?”

The signature of the companion object turned out to be clear. It was close to the edge of the outer gap, and orbiting the star at about a billion kilometers, slightly more distant than Jupiter is within our own Solar System. The ESO offers a superb video showing the twin disks of T Chamaeleontis and the location of the star’s companion from a variety of perspectives. I wasn’t able to embed the video successfully here because of margin problems, but I do recommend you give it a look.