‘Blue Stragglers’ in the Galactic Bulge

I’m fascinated by how much the exoplanet hunt is telling us about celestial objects other than planets. The other day we looked at some of the stellar spinoffs from the Kepler mission, including the unusual pulsations of the star HD 187091, now known to be not one star but two. But the examples run well beyond Kepler. Back in 2006, a survey called the Sagittarius Window Eclipsing Extrasolar Planet Search (SWEEPS) used Hubble data to study 180,000 stars in the galaxy’s central bulge, the object being to find ‘hot Jupiters’ orbiting close to their stars.

But the seven-day survey also turned up 42 so-called ‘blue straggler’ stars in the galactic bulge, their brightness and temperature far more typical of stars younger than those around them. It’s generally accepted that star formation in the central bulge has all but stopped, the giant blue stars of the region having exploded into supernovae billions of years ago. Blue stragglers are unusual because they are more luminous and bluer that would be expected. They’ve been identified in star clusters but never before seen inside the core of the galaxy. 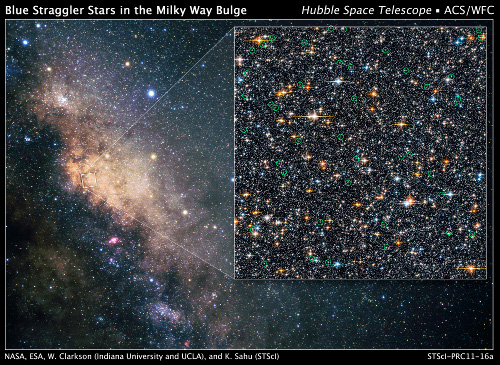 Image: Peering deep into the star-filled, ancient hub of our Milky Way (left), the Hubble Space Telescope has found a rare class of oddball stars called blue stragglers, the first time such objects have been detected within our galaxy’s bulge. Blue stragglers — so named because they seem to be lagging behind in their rate of aging compared with the population from which they formed — were first found inside ancient globular star clusters half a century ago. Credit: NASA, ESA, W. Clarkson (Indiana University and UCLA), and K. Sahu (STScI).

The galactic bulge is a tricky place to study because foreground stars in the disk compromise our view. But the SWEEPS data led to a re-examination of the target region, again with Hubble, two years after the original observations were made. The blue stragglers could clearly be identified as moving at the speed of the bulge stars rather than the foreground stars. Of the original 42 blue straggler candidates, anywhere from 18 to 37 are now thought to be genuine, the others being foreground objects or younger bulge stars that are not blue stragglers.

Allan Sandage discovered blue stragglers in 1953 while studying the globular cluster M3, leading scientists to ask why a star would appear so much younger than the stars around it. Stars in a cluster form at approximately the same time and should therefore show common characteristics determined by their age and initial mass. A Hertzsprung-Russell diagram of a cluster, for example, should show a readily defined curve on which the stars can be plotted.

Blue stragglers are the exception, giving the appearance of stars that have defied the aging process. One possibility is that they form in binaries, with the less massive of the two stars gathering in material from the larger companion, causing the accreting star to undergo fusion at a faster rate. More dramatic still would be the collision and merger of two stars — more likely in a region where stars are dense — which would cause the newly formed, more massive object to burn at a faster rate.

Scientists will use the blue straggler data to tune up their theories of star formation. Lead author Will Clarkson comments on the work, which will be published in the Astrophysical Journal:

“Although the Milky Way bulge is by far the closest galaxy bulge, several key aspects of its formation and subsequent evolution remain poorly understood. While the consensus is that the bulge largely stopped forming stars long ago, many details of its star-formation history remain controversial. The extent of the blue straggler population detected provides two new constraints for models of the star-formation history of the bulge.”

I’ll note in passing that Martin Beech (University of Regina) has suggested looking at blue stragglers in a SETI context, noting that some could be examples of astroengineering, the civilization in question using its technology to mix shell hydrogen into the inner stellar core to prolong its star’s lifetime on the main sequence. It’s an interesting suggestion though an unlikely one given that we can explain blue stragglers through conventional astrophysics. In fact, blue stragglers point to an important fact about the field some are calling ‘interstellar archaeology’ — gigantic astroengineering may be extremely difficult to tell apart from entirely natural phenomena, in which case Occam’s razor surely comes into play.

For the recent blue straggler discoveries, see Clarkson et al., “The First Detection of Blue Straggler Stars in the Milky Way Bulge,” in press at the Astrophysical Journal (preprint). On the possible application of blue stragglers to SETI, see Beech, “Blue Stragglers as Indicators of Extraterrestrial Civilizations?” Earth, Moon, and Planets 49 (1990), pp.177-186. And Greg Laughlin (UC-Santa Cruz) looks at blue stragglers as targets for photometric transit searches in this post on his systemic site.