The Light of Alien Cities

If you’re looking for a new tactic for SETI, the search for extraterrestrial intelligence, Avi Loeb (Harvard-Smithsonian Center for Astrophysics) and Princeton’s Edwin Turner may be able to supply it. The duo are studying how we might find other civilizations by spotting the lights of their cities. It’s an exotic concept and Loeb understates when he says looking for alien cities would be a long shot, but Centauri Dreams is all in favor of adding to our SETI toolkit, which thus far has been filled with the implements of radio, optical and, to a small extent, infrared methods. 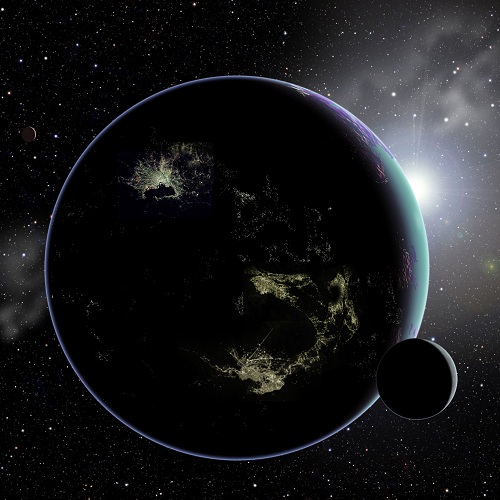 Image: If an alien civilization builds brightly-lit cities like those shown in this artist’s conception, future generations of telescopes might allow us to detect them. This would offer a new method of searching for extraterrestrial intelligence elsewhere in our Galaxy. Credit: David A. Aguilar (CfA).

Spotting city lights would be the ultimate case of detecting a civilization not through an intentional beacon but by the leakage of radiation from its activities. In my more naïve days when I just assumed such civilizations filled the galaxy, I imagined someone making an accidental detection of an errant radio signal with a desktop radio receiver, the ultimate ham radio DX catch. As I learned more and came to realize how attenuated such signals would be at these distances, it seemed more likely that we’d need to listen for directed signals, or at best the kind of accidental transmission that might indicate something like one of our own planetary radars.

Then, too, we have to take into account how much our own use of radio has changed, so that because of fiber optic cables and other technologies, we’re lowering our visibility in many wavelengths. An advanced civilization would presumably do the same, but Loeb and Turner figure lighting is something intelligent creatures are going to have no matter what they’re listening to or how they’re listening to it. This is from the recent paper on their work:

Our civilization uses two basic classes of illumination: thermal (incandesent light bulbs) and quantum (light emitting diodes [LEDs] and fluorescent lamps). Such artificial light sources have different spectral properties than sunlight. The spectra of artificial lights on distant objects would likely distinguish them from natural illumination sources, since such emission would be exceptionally rare in the natural thermodynamic conditions present on the surface of relatively cold objects. Therefore, artificial illumination may serve as a lamppost which signals the existence of extraterrestrial technologies and thus civilizations.

The first order of business is to show that searching for artificial lighting is possible within the Solar System, which Loeb and Turner approach by looking at objects in the Kuiper Belt. The technique is “…to measure the variation of the observed flux F as a function of its changing distance D along its orbit.” Working the math, they conclude that “…existing telescopes and surveys could detect the artificial light from a reasonably brightly illuminated region, roughly the size of a terrestrial city, located on a KBO.” Indeed, existing telescopes could pick out the artificially illuminated side of the Earth to a distance of roughly 1000 AU. If something equivalent to a major terrestrial city existed in the Kuiper Belt, we would be able to see its lights.

Objects of interest could be followed up with long exposures on 8 to 10 meter telescopes to examine their spectra for signs of artificial lighting, while radio observatories like the Low Frequency Array (LOFAR) or the Precision Array for Probing the Epoch of Reionization (PAPER) could be used to check for artificial radio signals from the same sources. Interestingly, the Large Synoptic Survey Telescope (LSST) survey will be obtaining much data on KBO brightnesses of the sort that could be plugged into Loeb and Turner’s methodology. Thus running a KBO survey as a tune-up of their methods would involve no additional observational resources.

The researchers aren’t expecting to find cities on KBOs, but they do point out that the next generation of telescopes, both space- and ground-based, is going to be able to reach much further into the universe for signs of artificial lighting. An exoplanet can be examined for changes to the observed flux during the course of its orbit. When it’s in a dark phase, we should see more artificial light on the night side than what is reflected from the day side. A signature like this would have to be bright — the night side would need to have an artificial brightness comparable to natural illumination on the day side — but an advanced civilization might have such cities. For now, the Kuiper Belt provides a handy set of targets we can use to test the technique.

The paper is Loeb and Turner, “Detection Technique for Artificially-Illuminated Objects in the Outer Solar System and Beyond,” submitted to Astrobiology (preprint).