We know that the early Earth was a violent place, but just how violent? The so-called Late Heavy Bombardment is thought to have occurred from 4.1 billion to 3.8 billion years ago, likely the result of asteroids being destabilized in their orbits by shifts in the orbits of the outer planets. That model is self-limiting, with the unstable asteroids being depleted over time and the Late Heavy Bombardment winding down, and it matches the dating of rocks from the lunar basins that show vivid evidence of the battering both Earth and Moon took.

But as I mentioned last week, the question of the length of the Late Heavy Bombardment is in play, with two papers in Nature suggesting that heavy impacts may have continued for a much longer time, perhaps half of the Earth’s history. William Bottke (Southwest Research Institute) and team are suggesting that during this early period, the inner edge of the asteroid belt was just 1.7 AU from the Sun — in a region called the E-belt, a largely extinct portion of the asteroid belt between 1.7 and 2.1 AU — rather than at today’s main belt inner edge distance of 2.1 AU. Asteroids dislodged from orbits here would have been ten times more likely to strike the Earth than asteroids from the region of today’s main belt. From the paper:

The main asteroid belt’s inner boundary is currently set by the v6 secular resonance at 2.1AU (one astronomical unit is approximately the Earth–Sun distance); objects entering this resonance have their eccentricities pumped up to planet-crossing values in less than a million years. Before the LHB, the giant planets and their associated secular resonances were in different locations, with the only remaining natural inner boundary being the Mars-crossing zone. Accordingly, the main asteroid belt may have once stretched into the E-belt zone as far as 1.7AU.

Destabilizing the E-belt asteroids, then, caused nearly all of them to be driven onto planet-crossing orbits over the next four billion years, with a small percentage of survivors winding up in the ‘Hungaria’ population of high-inclination asteroids. The record of major impacts is preserved in the melted droplets of debris called ‘impact spherules,’ which would have been scattered around the planet in the case of major events like the one causing the Chicxulub crater in Mexico, thought to have occurred 65 million years ago and potentially the event that caused the demise of the dinosaurs. You’ll recall it was Chicxulub that Tetsuya Hara (Kyoto Sangyo University) and colleagues used in their study of impact debris, as discussed here on Friday. 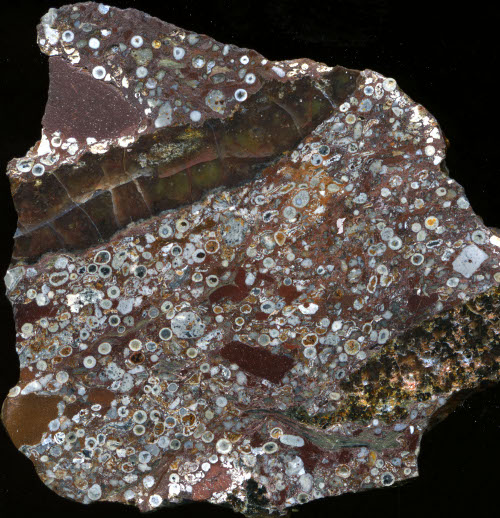 Image: Researchers are learning details about asteroid impacts going back to the Earth’s early history by using a new method for extracting precise information from tiny “spherules” embedded in layers of rock. The spherules were created when asteroids crashed into Earth, vaporizing rock that expanded as a giant vapor plume. Small droplets of molten rock in the plume condensed and solidified, falling back to the surface as a thin layer. This sample was found in Western Australia and formed 2.63 billion years ago in the aftermath of a large impact. Credit: Oberlin College/Bruce M. Simonson.

A period of bombardment emerges from the study of spherules that continued long past the time older theories assumed it had ended, making impact events a continuing player in the evolution of life. Brandon Johnson and Jay Melosh (Purdue University) add to this picture in the same issue of Nature by looking at similar spherules in rock formed between 2 billion and 3.5 billion years ago, finding evidence that the theory of an extended Late Heavy Bombardment makes sense. Johnson told Nature’s Helen Thompson in a review of his work that it “… shows that a lot more big asteroids — meaning dinosaur-killer or larger — were hitting Earth well after the current idea of when it ended.” The paper supports Bottke’s analysis, with impacts continuing to be prolific in the Archaean eon, when photosynthesizing cyanobacteria were on the rise.

Are major impacts always killer events, or do they spur evolution by continually shaping the environment, introducing organics and other key materials as life is taking hold? From Nature’s coverage of the story:

How life would have responded to a sustained barrage throughout this period is unclear. A giant impact would have come as a severe blow for some forms of early life, but it need not have been all bad news, says Steve Mojzsis, a geologist at the University of Colorado Boulder. That is because the energy deposited by the ongoing impacts could have created hot zones like those found near hydrothermal vents today. “These are great places for microbes,” says Mojzsis, who notes that some phylogenetic evidence suggests that the last common ancestors of all present-day life were heat-loving organisms.

The papers are Bottke et al., “An Archaean heavy bombardment from a destabilized extension of the asteroid belt,” Nature 485 (03 May 2012), 78–81 (abstract) and Johnson and Melosh, “Impact spherules as a record of an ancient heavy bombardment of Earth,” Nature 485 (03 May 2012), 75-77 (abstract). Be aware, too, of the Impact Earth! calculator, available online from Purdue to allow calculations of asteroid or comet impact damage based on the object’s mass. The new work should allow its engine to be fine-tuned.