Z-Pinch: Powering Up Fusion in Huntsville

The road to fusion is a long slog, a fact that began to become apparent as early as the 1950s. It was then that the ZETA — Zero-Energy Toroidal (or Thermonuclear) Assembly — had pride of place as the fusion machine of the future, or so scientists working on the device in the UK thought. A design based on a confinement technique called Z-pinch (about which more in a moment), ZETA began operations in 1957 and began producing bursts of neutrons, thought to flag fusion reactions in an apparent sign that the UK had taken the lead over fusion efforts in the US. 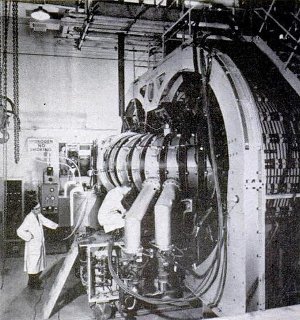 This was major news in its day and it invigorated a world looking for newer, cheaper sources of power, but sadly, the results proved bogus, the neutrons being byproducts of instabilities in the system and not the result of fusion at all. Fusion has had public relations problems ever since, always the power source of the future and always just a decade or two away from realization. But of course, we learn from such errors, and refined pinch concepts — in which electric current induced into a plasma causes (via the Lorenz force) the plasma to pinch in on itself, compressing it to fusion conditions — continue to be explored.

Image: The ZETA device at Harwell. The toroidal confinement tube is roughly centered, surrounded by a series of stabilizing magnets (silver rings). The much larger peanut shaped device is the magnet used to induce the pinch current in the tube. Credit: Wikimedia Commons.

In today’s Z-pinch work, current to the plasma is provided by a large bank of capacitors, creating the magnetic field that causes the plasma to be pinched into a smaller cylinder to reach fusion conditions (the axis of current flow is called the z axis, hence the name). Here we can think of two major facilities used in nuclear weapons effects testing in the defense industry as well as in fusion energy research: The Z Machine located at Sandia National Laboratories in New Mexico and the MAGPIE pulsed power generator at Imperial College, London. And lately a Z-pinch machine called a Decade Module Two has made the news.

As explained by an article in The Huntsville Times back in May, researchers at Marshall Space Flight Center and their colleagues at the University of Alabama at Huntsville will have a Decade Module Two (DM2) at their disposal once they finish the process of unloading and assembling the house-sized installation at Redstone Arsenal. Originally designed as one of several modules to be used in radiation testing, the DM2 was the prototype for a larger machine, but even this smaller version required quite an effort to move it, as can be seen in this Request for Proposal issued back in August of 2011, which laid out the dismantling and move from L-3 Communications Titan Corporation in San Leandro, CA.

The DM2 got a brief spike in the press as news of the acquisition became available, but note that the 60-foot machine is not expected to be powered up any earlier than 2013 and will not reach break-even fusion when it does. But this pulsed-power facility should be quite useful as engineers test Z-pinch fusion techniques and nozzle systems that would allow the resulting plasma explosions to be directed into a flow of thrust to propel a spacecraft. Z-pinch and related ignition methods have been under study for half a decade, but Huntsville’s DM2 may move us a step closer to learning whether pulsed fusion propulsion will be practical.

The fusion power effort includes not just MSFC and UAH but Boeing as well. Jason Cassibry (UAH) talks about its ultimate goal as being a lightweight pulsed fusion system that could cut the travel time to Mars down to six to eight weeks, and he’s quoted in this story in Popular Mechanics as saying that “The time is perfect to reevaluate fusion for space propulsion.” Working the kinks out of Z-pinch would be a major contribution to that effort, and we can hope the DM2 installation may lead to the design and testing of actual thrusters, though right now we’re still early in the process.

The Popular Mechanics article goes on to explain Z-pinch’s propulsion possibilities this way:

Cassibry imagines attaching a large reactor on the back of a human transport vessel. Similar to how the piston of a car compresses fuel and air in the engine, the reactor would use electrical and magnetic currents to compress hydrogen gas. That compression raises temperatures within the reactor up to 100 million degrees C—hot enough to strip the electrons off of hydrogen atoms, create a plasma, and fuse two hydrogen nuclei together. In the process of fusing, the atoms release more energy, which keeps the reactor hot and causes more hydrogen to fuse and release more energy. (These reactions occur about 10 times per second, which is why it’s “pulsed.”) A nozzle in the reactor would allow some of the plasma to rush outward and propel the spacecraft forward.

There aren’t many machines that can produce the power demanded by pulsed fusion experiments and Centauri Dreams wishes the DM2 team success not only at the tricky business of Z-pinch fusion experimentation but the even trickier challenge of funding deep space propulsion research. None of that will be easy, but if we can get to the stage of testing a magnetic nozzle for a pulsed fusion engine using the DM2 we’ll be making serious headway. Right now the work proceeds one step at a time, the first being to get the DM2 up and running.