A new paper out of the Glimpsing Heat from Alien Technologies search (G-HAT) at Penn State is packed with fascinating reading, and I’m delighted to send you in its direction (citation below) for a further dose of the energizing concepts of ‘Dysonian SETI.’ Supported by a New Frontiers in Astronomy and Cosmology grant funded by the John Templeton Foundation, G-HAT has been studying whether highly advanced civilizations are detectable through their waste heat at mid-infrared wavelengths, a tell-tale signature posited by Freeman Dyson in the 1960s.

We now have the highly useful dataset of some 100 million entries gathered by WISE, the Wide-field Infrared Survey Explorer mission, to work with. G-HAT researcher Roger Griffith, lead author of the paper on this work, went through these data, culling out 100,000 galaxies that could be seen with sufficient detail, and searching for any that produced an unusually strong mid-infrared signature. Fifty galaxies do show higher levels of mid-infrared than expected, necessitating follow-up studies to determine whether natural processes are at work or, indeed, the functions of an extraterrestrial civilization. But no clear signs of alien technology appear.

G-HAT’s founder, Jason Wright, points to the significance of this new scientific result:

“Our results mean that, out of the 100,000 galaxies that WISE could see in sufficient detail, none of them is widely populated by an alien civilization using most of the starlight in its galaxy for its own purposes. That’s interesting because these galaxies are billions of years old, which should have been plenty of time for them to have been filled with alien civilizations, if they exist. Either they don’t exist, or they don’t yet use enough energy for us to recognize them.” 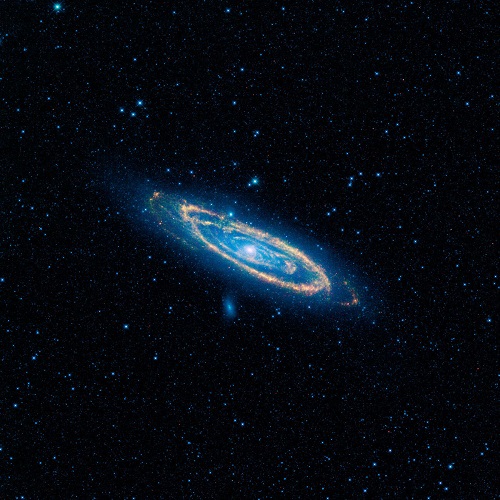 Image: A false-color image of the mid-infrared emission from the Great Galaxy in Andromeda, as seen by Nasa’s WISE space telescope. The orange color represents emission from the heat of stars forming in the galaxy’s spiral arms. The G-HAT team used images such as these to search 100,000 nearby galaxies for unusually large amounts of this mid-infrared emission that might arise from alien civilizations. Credit: NASA/JPL-Caltech/WISE Team.

Wright refers to the work as a ‘pilot study’ that will help the researchers tune up their methodologies to separate natural astronomical sources from what could be waste heat from an alien civilization. The team found some curiosities within our own Milky Way, including one cluster of objects that WISE registers strongly, but that appears black in visible light telescopes. Co-investigator Matthew Povich (Cal Poly Pomona) believes this to be a cluster of young stars inside a hitherto undiscovered molecular cloud. Another local find: A bright nebula around the star 48 Librae apparently flagging a huge dust cloud. Both will doubtless receive scrutiny from astronomers even as G-HAT itself moves on to study its own best galactic candidates.

Griffith and Cal Poly Pomona undergraduate Jessica Maldonado studied the astronomical literature to find which of the most interesting objects turned up by the survey had previously been studied. About half a dozen had received no previous scrutiny, a fact that does not surprise G-HAT co-investigator Steinn Sigurðsson:

“When you’re looking for extreme phenomena with the newest, most sensitive technology, you expect to discover the unexpected, even if it’s not what you were looking for. Sure enough, Roger and Jessica did find some puzzling new objects. They are almost certainly natural astronomical phenomena, but we need to study them more carefully before we can say for sure exactly what’s going on.”

That there is much for G-HAT to do should be obvious from the fact that using the abundant WISE data in the mid-infrared is a new direction for SETI. There are those who would argue, as Michael Hart did back in 1975, that given the age of the Milky Way, we should be aware of other civilizations if they indeed existed. Hart believed that any galaxy will become colonized in a relatively short time when compared to the overall age of the galaxy. Either there is no spacefaring species in a galaxy, or the galaxy in question quickly fills up with them.

Nikolai Kardashev classified civilizations in 1965 on the basis of the energies they could use, a Type II civilization being one capable of using the power of its host star’s entire luminosity. This is the now familiar realm of the Dyson sphere, intercepting the entire output of its star. We then move to a Type III civilization, one capable of using the stellar luminosity of an entire galaxy. Hart’s argument was that the emergence of a Type II culture is shortly followed by Type III. If interstellar flight is common, we should expect many Type III civilizations. The paper notes:

If Hart’s reasoning is sound, then we should expect that, unless intelligent, spacefaring life is unique to Earth in the local universe, other galaxies should have galaxy-spanning supercivilizations, and a search for K3’s may be fruitful. If there is a flaw in it, then intelligent, spacefaring life may be endemic to the Milky Way in the form of many K2’s, in which case a search within the Milky Way would be more likely to succeed. It is prudent, therefore, to pursue both routes.

Type II civilizations in our own galaxy should be detectable, and we’ve looked before at searches for the waste heat of the Dyson spheres such cultures might create. Richard Carrigan’s work on this score has been pioneering (see Toward an Interstellar Archaeology as an entry into other articles on the topic that are in the archives). Carrigan used data from IRAS (the Infrared Astronomical Satellite, launched in 1983), deciding out of 11,000 sources that the best of the Dyson sphere candidates he found were reddened and dusty astronomical objects.

The G-HAT paper, the third produced by the group, also points to the searches for Dyson spheres by Jun Jugaku and Shiro Nishimura, whose work in the 1990s found no Dyson spheres around the roughly 550 stars they surveyed within 25 parsecs. James Annis conducted a search for Kardashev Type III civilizations in the late 1990s and found no evidence for them, but mid-infrared surveys like WISE give us far more data within which to conduct such a search.

Thus these early results from G-HAT point to deepening study as the team refines its methods to make them sensitive to lower waste heat levels from extraterrestrial technologies. The currently reported work tells us that none of the galaxies resolved by WISE in this study contain Type III civilizations that are reprocessing 85 percent or more of the starlight of their galaxy into the mid-infrared. And as mentioned above, out of 100,000 galaxies, only fifty show a mid-infrared signature that could be considered consistent with reprocessing more than 50 percent of the starlight.

These fifty point to the further investigations ahead. As does this::

We also identify 93 sources with γ > 0.25 but very little study in the scientific literature. Three of these sources are MIR-bright [mid-infrared] and red galaxies that are essentially new to science, having little or no literature presence beyond bare mentions of a detection by IRAS or other surveys.

Here γ refers to thermal waste heat emitted by an object (waste heat luminosity), which is expressed as a fraction of the starlight available to the civilization. The paper explains that for waste heat temperatures in the 100-600 K range, values of γ near 1 would indicate that most of the galaxy’s luminosity was in the mid-infrared (now we are talking about the waste heat of a Type III technology). Values near 0 would imply that the value of any alien waste heat was small compared to the total output of the stars in the galaxy. The paper continues:

Verification that the MIR flux in all of these galaxies is predominantly from natural sources (e.g., through SED [Spectral Energy Distribution] modeling across many more bands than WISE offers or spectroscopy) will push our upper limit on galaxy-spanning alien energy supplies in our sample of 1 × 105 galaxies down to 50% of the available starlight. In the meantime, these are the best candidates in the Local Universe for Type iii Kardashev civilizations.

Next post: Exomoons: A Data Search for the Orbital Sampling Effect and the Scatter Peak