The vast changes our planet has undergone since formation add a real sense of humility to the exoplanet hunt. It’s the humility that comes with exposure to deep time, reminding us that worlds like ours have developed through phases wildly different than the conditions we experience today. As we tune up our techniques for studying rocky worlds, we’ll find planets in entirely different states of their own evolution, perhaps some with life, and some young enough to be life’s future home. Perhaps some will be worlds where life has come, and gone.

We have much to learn about how our own planet developed life, and new work from an international team led by Philip Pogge von Strandmann (University College London) gives us insight into a key issue: How long did it take for oxygen levels in the oceans and atmosphere to increase to the point that animal life could take off some 600 million years ago? Underlying the question is how the evolution of life ties in to changes in climate. For it seems likely that increased oxygen was the factor that brought about the first major expansion of animal life.

“Oxygen was like a slow fuse to the explosion of animal life. Around 635 Ma, enough oxygen probably existed to support tiny sponges. Then, after 580 Ma, strange creatures, as thin as crêpes, lived on a lightly oxygenated seafloor. Fifty million years later, vertebrate ancestors were gliding through oxygen-rich seawater. Tracking how oxygen increased is the first step towards understanding why it took so long. Ultimately, a grasp of geologic controls on oxygen levels can help us understand whether animal-like life might exist or not on Earth-like planets elsewhere.” 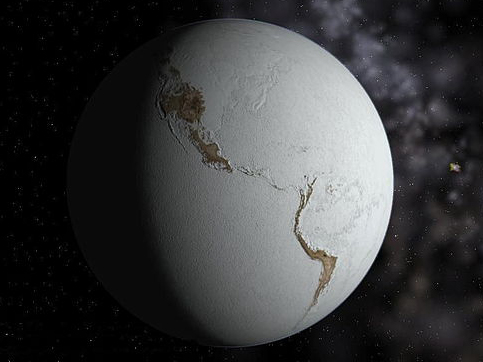 The researchers measured selenium isotopes in rock samples laid down under the ocean to track oxygen levels from 770 to 525 million years ago (across the full period believed to be covered by what is known as the Neoproterozoic Oxygenation Event). The marine shales are drawn from seven different geological sections, with samples from Canada (the Mackenzie Mountains), China (the so-called Yangtze Platform), Australia and the western US.

This would be a planet that looked nothing like what we’re familiar with, as the image above suggests. The land would have been covered in ice and the oceans frozen all the way to the equatorial regions. Temperature changes as these eras progressed would in each case melt the glaciers and produce a flow of nutrients into the oceans, one that would build the levels of organic carbon in seafloor sediments as oceanic plankton that flourished from that flow died. The growth in such carbon would lead to gradual increases in the level of oxygen.

A key finding of the paper is that rather than occurring after the Gaskiers glaciation, the oxygenation began much earlier, during or at the end of the Marinoan glaciation. From the paper:

“…the significance of the Se isotope record is not only that it adds to growing evidence that the late Proterozoic and Cambrian ocean and atmosphere reached a progressively more oxic state, coinciding with the diversification of animal life, but also that the process of oxidation was protracted, and not ultimately triggered by the Gaskiers deglaciation, as other data suggest.”

Moreover, it took approximately 100 million years for atmospheric oxygen to climb from less than 1 percent to over ten percent of today’s level. The occurrence of oxygenation in fits and starts over such a lengthy period of time is evidence, the team believes, that early animal evolution received its needed boost from these increased levels of oxygen. Says Pogge von Strandmann: “We were surprised to see how long it took Earth to produce oxygen and our findings dispel theories that it was a quick process caused by a change in animal behaviour.”

Next post: Wolf 1061c: A Nearby Habitable Zone Planet?