Debris disks around young stars are keys to understanding how planets form. But what about debris around older stars? We now have the best view ever achieved of the dusty disk around an aging star — a red giant — and we’re forced to ask whether such a debris disk, so similar to what we see around young stars, could itself form a second generation of planets. The star in question is a binary designated IRAS 08544-4431, first detected by the Infrared Astronomical Satellite in the 1980s. Some 4000 light years from Earth in the direction of the southern constellation Vela (The Sails), the system contains a red giant (the source of the material in the surrounding disk) and a much smaller, less evolved companion star. 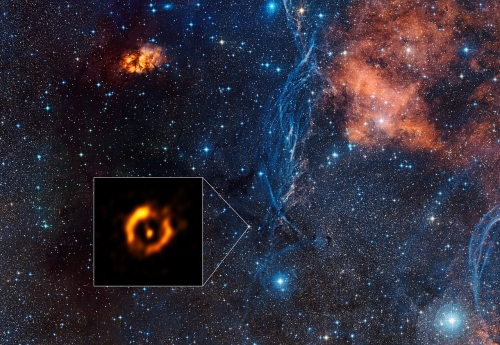 Here we’re working with data from the Very Large Telescope Interferometer at the European Southern Observatory’s Paranal Observatory (Chile) using the PIONIER (Precision Integrated-Optics Near-infrared Imaging ExpeRiment) instrument that draws out the full power of the VLTI. Jacques Kluska (University of Exeter, UK) explains what we are looking at:

“By combining light from several telescopes of the Very Large Telescope Interferometer, we obtained an image of stunning sharpness — equivalent to what a telescope with a diameter of 150 metres would see. The resolution is so high that, for comparison, we could determine the size and shape of a one euro coin seen from a distance of two thousand kilometres.”

Have a closer look at the debris disk here. The inner dust rim of the circumbinary disk corresponds to where we would expect the dusty disk to begin, with any dust closer to the two stars evaporating in the flux. While there are a number of debris disks associated with nearby young stars, we have not until now had a detailed look at the disks around old stellar systems like this one. Our first comparison between the two types of disk shows that they look remarkably alike even though they form at opposite ends of the star’s life cycle. 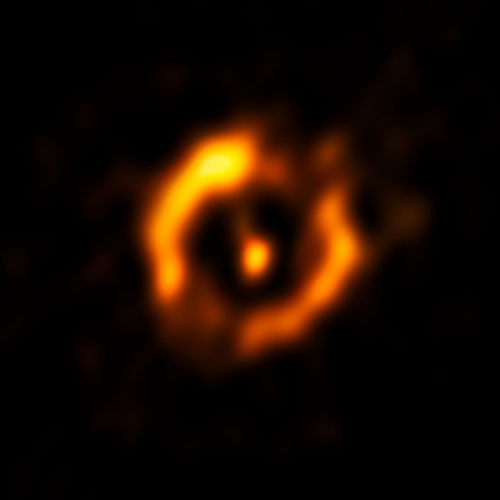 The red giant in this system is an asymptotic giant branch (AGB) star (the ‘asymptotic giant branch’ is that part of the Hertzsprung-Russell diagram containing low- to medium-mass stars that are highly evolved; i.e., red giants that emerge late in the lifetime of the star). As for the binary companion, the researchers, led by Michel Hillen and Hans Van Winckel (Instituut voor Sterrenkunde in Leuven, Belgium) believe that it shows its own accretion disk. Hillen refers to “…a fainter glow that is probably coming from a small accretion disc around the companion star,” and adds, “We knew the star was double, but weren’t expecting to see the companion directly.”

The paper makes the case for the second accretion disk. In the passage below, Hα refers to the H-alpha spectral line for hydrogen. P Cygni is a hypergiant luminous blue variable (LBV) star in the constellation Cygnus to which this system is being compared:

IRAS 08544-4431 is the first post-AGB binary system in which direct emission from the secondary is detected, and even spatially separated from the primary. There are two hypotheses to explain the high companion flux at 1.65 µm: thermal emission from the surface of a 1.5−2.0 M⊙ red giant or emission from a compact accretion disk around a 1.5−2.0 M⊙ main-sequence star. We consider the second case more likely because observations of similar post-AGB systems indicate that circum-companion accretion disks may be common… The main evidence comes from the detection (in Hα and for more inclined systems) of fast outflows that originate from the companion. The Hα line of IRAS 08544-4431 has a P Cygni-like profile… which is consistent with this interpretation, given that we find the system to be viewed close to face-on.

Can a red giant form new planets from the debris disk that surrounds it? And what about surviving planets around an evolving red giant? These are interesting speculations, and they call to mind a 2005 paper from Bruno Lopez, Jean Schneider and William Danchi titled “Can Life develop in the expanded habitable zones around Red Giant Stars?” Here’s food for thought:

For a 1 M⊙ star at the first stages of its post main-sequence evolution, the temporal transit of the habitable zone is estimated to be of several 109 years at 2 AU and around 108 years at 9 AU. Under these circumstances life could develop at distances in the range 2-9 AU in the environment of sub-giant or giant stars and in the far distant future in the environment of our own Solar System. After a star completes its first ascent along the Red Giant Branch and the He flash takes place, there is an additional stable period of quiescent He core burning during which there is another opportunity for life to develop. For a 1 M⊙ star there is an additional 109 years with a stable habitable zone in the region from 7 to 22 AU.

We tend to rule out red giant stars when it comes to possible life, but perhaps we’re jumping to one conclusion too many. In any event, the new work on the IRAS 08544-4431 system reminds us we’re early in the game when it comes to understanding what goes on in this environment.

The paper on IRAS 08544-4431 is Hillen et al., “Imaging the dust sublimation front of a circumbinary disk,” Astronomy & Astrophysics 588, L1 (2016). Preprint available. The Lopez, Schneider and Danchi paper on red giants is “Can Life develop in the expanded habitable zones around Red Giant Stars?” Astrophysical Journal Vol. 627, No. 2 (2005). Abstract / preprint.