Deep Stare into a Dusty Universe

It’s not often that I get the chance to back up and take a broad look at the universe, the kind of thing that reinforces my interest in cosmology and structure at the grandest scale. But today I’ll take my cue from the Royal Astronomical Society’s annual meeting, now underway in Nottingham UK, which gives me the chance to look at a new catalog from the European Space Agency’s Herschel Space Observatory. On offer is a guide to hidden sources of energy in the universe, on a scale at which the Milky Way itself is but a bit of froth on a cosmic wave.

As presented by Haley Gomez (Cardiff University) at the National Astronomy Meeting, the project known as the Herschel Astrophysical Terahertz Large Area Survey (Herschel-ATLAS) is offering a deep look at galaxies through time. Because about half the light emitted by stars and galaxies is absorbed by interstellar dust grains, Herschel’s ability to work in the far-infrared can reveal that light re-emitted, showing us the sources of energy that would be hidden at visible wavelengths, and at a level of detail that has previously been beyond our reach.

The work highlights half a million far-infrared sources near and far, including galaxies twelve billion light years away, less than two billion years after the Big Bang. The latter are dusty and difficult to observe with conventional telescopes, and as the image below reveals, they are often gravitationally lensed by closer galaxies in the same field of view. Gravitational lensing occurs when an intervening massive object distorts spacetime so that light, following the curved path, is ‘bent’ and magnified. The effect is now exploited in a wide range of astronomical studies. 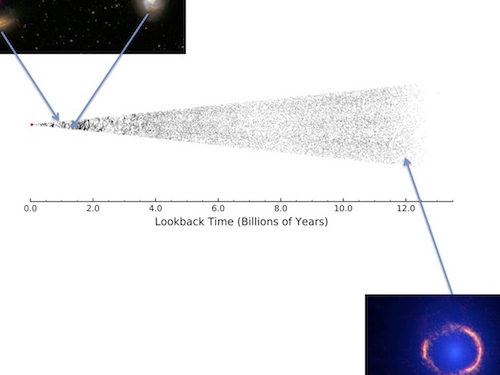 Image (click to enlarge): An illustration of the time reach of the Herschel ATLAS and the kinds of objects it has discovered. The Big Bang occurred 13.7 billion years ago. The points in the diagram (approximately 40,000) show some of the Herschel ATLAS objects. The survey discovered nearby galaxies fairly similar to our own (see galaxies to the top left), and also galaxies that are so far away that we see them as they were only two billion years after the Big Bang. The figure to the bottom right shows a detailed image made with the Atacama Large Millimetre Array of one of these early galaxies. The spectacular ‘Einstein ring’ shows that the far-infrared emission from this source has been gravitationally lensed by the gravitational field of an intervening galaxy. These ultra-distant galaxies are forming stars at a rate 1000 times greater than in the Milky Way and are shrouded by dust from the view of optical telescopes. These violently star-forming and dusty galaxies are the ancestors of the galaxies around us in the Universe today. Credit: The Herschel ATLAS team, the European Space Agency, ALMA and NRAO.

It’s intriguing to note that some galactic change can still be traced in the relatively recent (in astronomical terms) past. Even one billion years ago, the Herschel ATLAS catalog demonstrates, galaxies were undergoing faster star formation and were more dusty than galaxies today. Nathan Bourne (University of Edinburgh) describes the result:

“We were surprised to find that we didn’t need to look far in the past to see signs of galaxy evolution. Our results show that the reason for this evolution is that galaxies used to contain more dust and gas in the past, and the universe is gradually becoming cleaner as the dust is used up.”

Thus we have a look at cosmic history from the violent star-formation periods in a roiling early universe to a far more sedate cosmos today. Bear in mind that only a few hundred dusty sources from the early universe have been previously studied, whereas the Herschel results offer half a million galaxies as cosmic context, a potential game-changer in our study of early star formation. Says Göran Pilbratt (Herschel Project Scientist): “Although Herschel made its last observation in 2013, current and future generations of astronomers will find the H-ATLAS maps and catalogues essential for finding their way around the hidden universe.”

From the paper (internal references omitted for brevity):

The chief original goal of the survey was to provide a relatively shallow Herschel survey over a very large area of sky, with the specific aims of providing measurements of the dust masses and dust-obscured star formation rate for tens of thousands of nearby galaxies…, complementing the large optical spectroscopic surveys of the nearby Universe, such as the Sloan Digital Sky Survey (SDSS)… and the Galaxy and Mass Assembly project (GAMA). However, the exceptional sensitivity of Herschel, aided by the large and negative k−correction at submillimeter wavelengths…, has meant that a significant fraction of the sources in H-ATLAS actually lie at high redshift…. The H-ATLAS survey is therefore useful both to astronomers studying the nearby Universe and to those studying the early (z > 1) Universe.

And a note of exoplanetary interest that I wouldn’t have expected:

The large area of the survey means that there are also potential uses for it in Galactic astronomy…, with one practical example being a search for debris disks around stars… 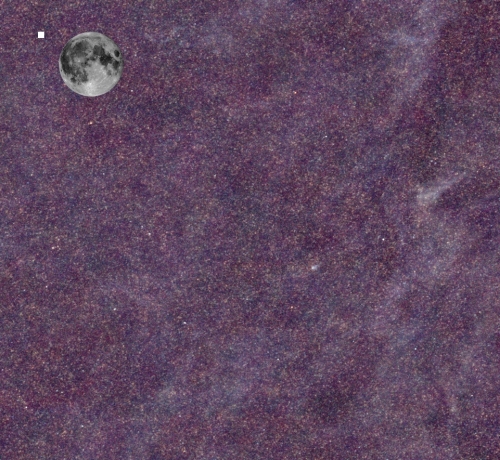 Image (click to enlarge): A small glimpse of one region, a tenth of the full area of the Herschel ATLAS images. Everything in this image, apart from the picture of the Moon, which has just been placed there to show the area of sky covered by the survey and the small square that shows the area covered by the Hubble Deep Field, consists of far-infrared emission from cosmic dust. The faint wisps are far-infrared emission from dust grains in the Milky Way but everything else in the image is a dusty galaxy. There are approximately 6000 dusty galaxies detected in this image, while the entire survey contains roughly half a million dusty galaxies, from galaxies similar to our own, to violently star-forming and very dusty galaxies that are being seen as they were over ten billion years ago. This image also shows how the field of hidden astronomy has evolved. The Hubble Deep Field was the first area surveyed by a dust sensitive camera called SCUBA almost 20 years ago. Five galaxies were found and the observations took 50 hrs, meaning it took 10 hours observing time to detect a galaxy. The Herschel-ATLAS maps released today cover an area 100,000 times larger and it took Herschel only 5 seconds on average to detect a galaxy in these images. Credit: The Herschel ATLAS team and the European Space Agency.

Two papers are in press at Monthly Notices of the Royal Astronomical Society. The only one I’ve been able to study so far is Valiante et al., “The Herschel-ATLAS Data Release 1 Paper I: Maps, Catalogues and Number Counts,” not yet available on arXiv, but I’ll get the links to it and a companion paper up as soon as I have them.