Yesterday we looked at the PLANETS telescope, now under construction on the Haleakala volcano on the island of Maui. What will become the world’s largest off-axis telescope is considered a pathfinder, part of the progression of instruments that will take us through the array of sixteen 5-meter mirrors that will be called ExoLife Finder, itself to be followed by Colossus, an instrument comprised of 58 independent off-axis telescopes. Colossus will use ultra-thin mirror technologies and interferometric methods to achieve an effective resolution of 74 meters. And it will be optimized for detecting extrasolar life and extraterrestrial civilizations. 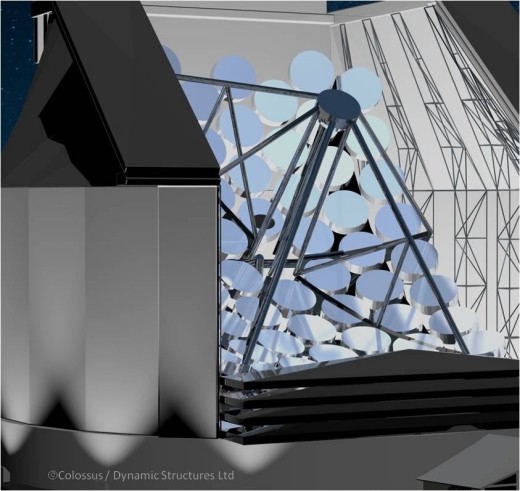 How to build something on such a scale? The design work is being handled by a consortium led by Jeff Kuhn (University of Hawaii), Svetlana V. Berdyugina (University of Hawaii/Kiepenheuer Institut für Sonnenphysik), David Halliday (Dynamic Structures) and businessman Caisey Harlingten, backed by an international team of astronomers associated with the PLANETS Foundation, as we saw yesterday. Building an instrument of this scale calls for innovation across the board, especially in terms of reducing weight and heightening resolution.

Thus Colossus relies upon extremely lightweight mirrors that deploy electromechanical force actuators that control the mirror’s shape and provide its stiffness. These mirrors are not separated from their electromechanical backing structure after manufacturing, depending on a network control system to fix their shape. In this overview of the Colossus design, they are described as ‘live mirrors,’ unlike normal telescope optics because they have much less mass and can be created without conventional grinding.

An instrument like this has sufficient aperture and scattered light suppression to detect exoplanet biomarkers and, if they exist, the markers of extraterrestrial civilizations. It’s on this latter issue that I want to focus today. Over the past few years, we’ve delved into what is being called ‘Dysonian SETI,’ the search for other civilizations not through dedicated beacons but astronomical evidence of their activities. The reference to Freeman Dyson goes back to his description of spherical structures for gathering the total luminosity of a host star, the so-called Dyson sphere, or as it is also imagined, the Dyson ‘swarm’ of energy-gathering technology.

Richard Carrigan, a scientist emeritus in the Accelerator Division at the Fermi National Accel­era­tor Laboratory, has run searches for such objects using data from the Infrared Astronomical Satellite (IRAS) mission (1983), which he believes sensitive enough to find Dyson spheres out to about 300 parsecs. But he is hardly the only one to mount such searches. The Russian radio astronomer Vyacheslav Ivanovich Slysh likewise surveyed infrared data for Dyson signatures, as did M. Y. Timofeev, collaborating with Nikolai Kardashev, in an attempt to scan the same IRAS data.

Carl Sagan, working with Russell Walker, was analyzing “The Infrared Detectability of Dyson Civilizations” (a paper in The Astrophysical Journal) back in the 1960s, noting the problems of distinguishing a Dyson sphere signature from natural phenomena. I won’t go deeper in this direction, though if you’re interested, the archives here cover the various search attempts as well as the ongoing work of the Glimpsing Heat from Alien Technologies group at Ohio State (see Archaeology on an Interstellar Scale and G-HAT: Searching for Kardashev Type III for more references on recent work). The point is that we have yet to find something that can be identified as a Dyson sphere or swarm despite repeated attempts.

The building of Colossus would allow us to move beyond the enormous Dyson constructs (spherical structures with planetary-like radii) to examine much weaker, but surely more likely, heat signatures from an active extraterrestrial civilization. Running a civilization takes power, and we know that by virtue of the laws of thermodynamics, power produces heat. Notice that in both Dysonian searches and these attempts to find heat as a byproduct of a civilization’s ongoing activities, we are not assuming any intent to communicate on the part of the extraterrestrial culture. We are simply trying to observe the unavoidable consequence of being a tool-using civilization that has reached a certain level of development.

In a paper looking at Colossus and its application to this search, Jeff Kuhn and Svetlana Berdyugina explain the point this way:

Waste heat is a nearly unavoidable indicator of biological activity, just as the energy that civilization consumes is eventually reintroduced into the planetary environment as heat. On planetary scales, biologically produced heat tends to be spatially clustered, just as an ET civilizations’ technological heat is difficult to distribute uniformly. Planetary surface topography and the efficient tendency for population to cluster in agrarian and urban domains leads to heat ‘islands’ (cf. Rizwan et al. 2008).The temporal and spatial distribution of this heat can be an observable ‘fingerprint’ for remote sensing of civilizations. Here we argue that we may soon be in a position to detect this thermodynamic signal from Type I, nearly Earth-like civilizations. 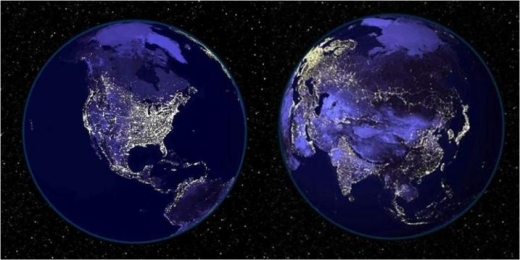 But as we’ll see tomorrow, there are limits on the power a civilization can consume at the planetary level. And waste heat radiation can become a powerful signature for detection with the right equipment. A tool like Colossus, operating not with a wide field of view like most of the giant telescopes in the pipeline but observing only a few arcseconds of the sky at a time, would be capable of studying nearby planets in the habitable zone of their stars to detect such waste heat. A survey of stars within roughly 60 light years of the Sun could thus help us identify an extraterrestrial civilization or, just as important, demonstrate the lack of same.

More on Colossus tomorrow as we look at its methods, and address the question of whether technological civilizations survive. We can’t know the answer to this yet, but beginning a statistical survey of nearby stars is one way to get a glimpse of our own possible destiny. We also need to think about giant telescopes and their capabilities at detecting photosynthetic organisms in extrasolar systems. We may not find civilizations, but we can still find life.

The Colossus description paper is Kuhn et al., “Looking Beyond 30m-class Telescopes: The Colossus Project,” SPIE Astronomical Telescopes and Instrumentation (2014). Full text. The paper on Colossus and waste heat is Kuhn & Berdyugina, “Global warming as a detectable thermodynamic marker of Earth-like extrasolar civilizations: the case for a telescope like Colossus,” International Journal of Astrobiology 14 (3): 401-410 (2015). Full text. For the overview on Colossus, see the project’s home page.