From Spitzer to JWST’s Early Targets

Yesterday’s post on the Spitzer Space Telescope leads naturally to the targets it produced for its successor. For when Spitzer’s mission ends on January 30, we have the far more powerful James Webb Space Telescope, also operating at infrared wavelengths, in queue for a 2021 launch. In many ways, Spitzer has been the necessary precursor for JWST, for it was the need to operate a telescope at extremely low temperatures in order to maximize infrared sensitivity that drove Spitzer design. JWST must maintain its gold-coated beryllium mirror at similarly precise temperatures.

With over 8,700 scientific papers published based on Spitzer findings, a number that will continue to grow for many years, a path has been charted that JWST will follow in the form of observations early in its mission. Consider WASP-18b, a gas giant of ten times Jupiter mass in a tight orbit around its star. Data from both Spitzer and Hubble showed in 2017 that the planet is laden with carbon monoxide and all but devoid of water vapor. No other extrasolar planet can match this one in the way carbon monoxide dominates its upper atmosphere.

What’s going on in the atmosphere of this planet merits close study because it’s extreme even for ‘hot Jupiters’ in being so close to its star that it may not survive another million years. Expect a long look from JWST into the processes at work here. Nikku Madhusudhan (University of Cambridge) was a co-author on the 2017 paper describing the WASP-18b findings:

“The only consistent explanation for the data is an overabundance of carbon monoxide and very little water vapor in the atmosphere of WASP-18b, in addition to the presence of a stratosphere. This rare combination of factors opens a new window into our understanding of physicochemical processes in exoplanetary atmospheres.”

The image below implies the method: Transmission spectroscopy. We can look at the light of the star passing through the atmosphere of the planet as it moves around the star in its orbit. 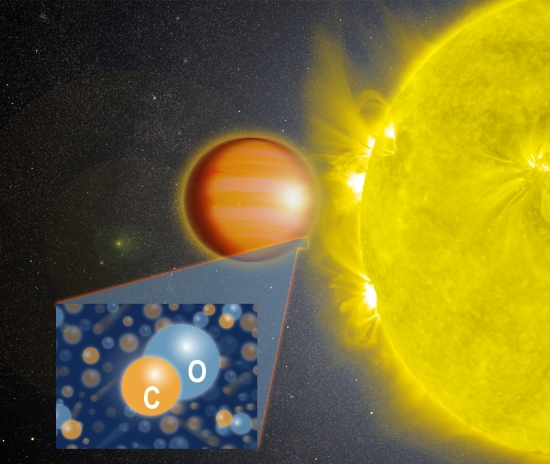 Image: A NASA-led team of scientists determined that WASP-18b, a “hot Jupiter” located 325 light-years from Earth, has a stratosphere that’s loaded with carbon monoxide, or CO, but has no signs of water. Credit: Goddard Space Flight Center.

At TRAPPIST-1, expect the fourth planet, TRAPPIST-1e, to receive early JWST scrutiny because of its density and surface gravity, both similar to Earth’s, in combination with incoming stellar flux sufficient to keep temperatures in the range needed for water on the surface. JWST should be able to tell us whether this planet does indeed have an atmosphere, and assuming it does, whether molecules like carbon dioxide or water vapor are present.

Here again Spitzer helped set the table, working with ground-based telescopes to confirm the first two candidates (found by the Transiting Planets and Planetesimals Small Telescope in Chile) and discover the other five. Our ideas of what these planets look like will change with the new data JWST, 1000 times more powerful than Spitzer, will bring in. The Hubble instrument has not been able to detect evidence for a hydrogen-dominated atmosphere on TRAPPIST-1d, e and f, making rocky composition likely. But it’s going to take JWST to further clarify the presence of atmospheres on the seven worlds and begin the study of their chemistry.

All of that should take what is a very fanciful image (below) and help us determine how far from reality it actually is. At present we’re simply injecting sparse data into the realm of art. As Nikole Lewis (Cornell University) says, “The diversity of atmospheres around terrestrial worlds is probably beyond our wildest imaginations. Getting any information about air on these planets is going to be very useful.” 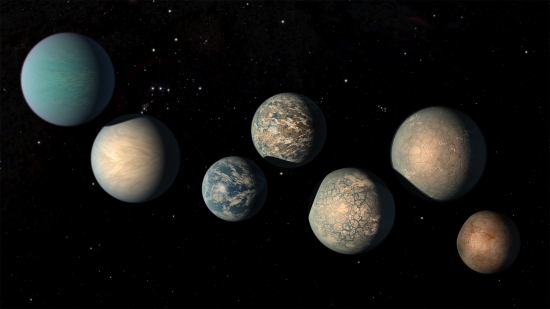 Image: This artist’s concept shows what the TRAPPIST-1 planetary system may look like, based on available data about the planets’ diameters, masses and distances from the host star, as of February 2018. Credit: NASA/JPL-Caltech.

Spitzer’s work on 55 Cancri e will also inform early JWST studies of the system. Spitzer was able to produce data leading to the first temperature map of a super-Earth, in this case an apparently rocky world about twice the size of our own. Lava flows may be the cause of the extreme temperature swings between one side of the planet and the other, as noted in 2016 by Brice Olivier Demory (University of Cambridge), who was lead author of the paper in Nature:

“Our view of this planet keeps evolving. The latest findings tell us the planet has hot nights and significantly hotter days. This indicates the planet inefficiently transports heat around the planet. We propose this could be explained by an atmosphere that would exist only on the day side of the planet, or by lava flows at the planet surface.”

Spitzer put in 80 hours of infrared telescope time in the 55 Cancri e work, watching this tidally locked world move about its star and allowing the construction of the temperature map. Mission scientists pushed Spitzer hard in accumulating their data, using novel calibration techniques to extract maximum results from a detector that had not been design to work at such high precision. Now JWST will help sharpen the map’s focus to explain its unusual temperature swings, which argue against a thick atmosphere and global temperature distribution. 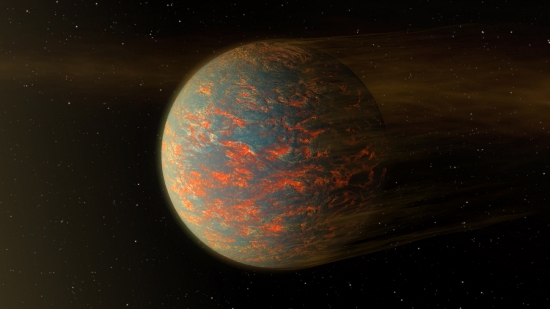 Image: 55 Cancri e is tidally locked to its star, just as our moon is to Earth, which means that one side always sizzles under the heat of its star while the other side remains in the dark. If the planet were covered in lava, then the hot, sun-facing side of the planet would have liquid lava flows, while the colder, dark side would see solidified lava rock. The hardened lava would be unable to transport heat across the planet, explaining why Spitzer detected that the cold side of the planet is much colder than the hot side. Such a lava planet, if it exists, would have dust streaming off of it, as illustrated here. Radiation and winds from the nearby star would blow off the material. Scientists say that future observations with NASA’s upcoming James Webb Space Telescope should provide more details about the nature of this exotic world. Credit: NASA/JPL-Caltech.

Both Spitzer and Webb are sensitive to the infrared glow of gas and dust orbiting in circumstellar rings around stars, which means JWST will be able to extend our knowledge of planetary formation. The same sensitivity will make JWST the instrument of choice in the study of brown dwarfs, an area where Spitzer has already been able to examine clouds in brown dwarf atmospheres. What’s interesting here are the differences between the distribution and motion of clouds on brown dwarfs and the atmospheric boiling seen on true stars. JWST will investigate winds that seem reminiscent of the belts of Jupiter, Saturn, Uranus and Neptune.

I’ve focused on exoplanetary targets here, but of course the handoff from Spitzer to JWST will also involve using the large surveys of Spitzer and the Hubble instrument to furnish JWST with targets like GN-z11, now the most distant galaxy ever measured. Sean Carey is manager of the Spitzer Science Center at Caltech/IPAC in Pasadena:

“Spitzer surveyed thousands of galaxies, mapped the Milky Way and performed other groundbreaking feats by looking at large areas of the sky. Webb won’t have this capability, but it will revisit some of the most interesting targets in the Spitzer surveys to reveal them in amazing clarity.”

JWST’s higher sensitivity should make it possible to find galaxies that are even older. It will also home in on luminous infrared galaxies (LIRG), which Spitzer found to be producing far more energy per second than typical galaxies, most of it in the form of far-infrared light. Star formation and galactic mergers come into focus, as does the growth of supermassive black holes. All of this depends, of course, on getting a fabulously complex telescope plagued by cost overruns into its future home at the L2 Lagrangian point 1.5 million kilometers from the Earth.

All launches are scary, but this one more than most. We need Spitzer’s successor to fly.

Previous post: Looking Back at the Spitzer Space Telescope