A Fast Radio Burst in the Milky Way

A sequence of new observations gives us a leading candidate to explain Fast Radio Bursts (FRBs). These powerful bursts of radio waves, lasting but milliseconds, first turned up in our data in 2007 and have been a mystery ever since. As they were found in other galaxies, it has been difficult to determine their exact location, and they were impossible to predict as most seemed to be one-off events, although astronomers have subsequently found some that do repeat.

Among the possible causes of FRBs, stellar remnants have been put forward, with the kind of highly magnetic neutron stars called magnetars receiving close scrutiny because their magnetic fields could be the engine driving the bursts. We now have three papers in Nature that give us tight observational evidence of the kind that has been lacking. Between the three, we have data that for the first time link an FRB in our own galaxy to a magnetar, the object known as SGR 1935+2154, located in the constellation Vulpecula. 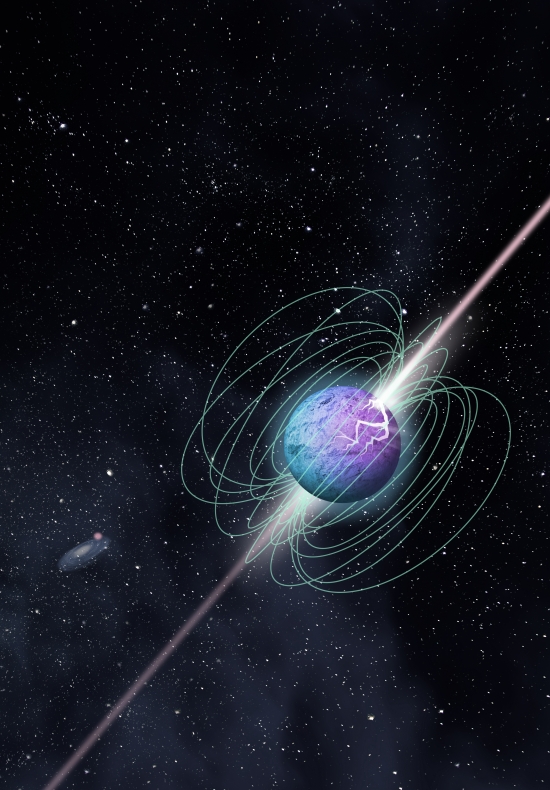 Let’s look at the events involved here. We begin with two space-based observatories. Both the Fermi Gamma-ray Space Telescope and the Neil Gehrels Swift Observatory registered rapid bursts of gamma- and X-rays from this object in late April. The spate of burst activity lasted for hours and was also observed by NASA’s Neutron star Interior Composition Explorer, an X-ray telescope mounted on the International Space Station.

This was followed by observations about thirteen hours later of another X-ray burst, once again seen by numerous instruments, including the European Space Agency’s INTEGRAL mission as well as China’s Huiyan X-ray satellite and the Russian Konus gamma-ray burst monitor, a Russian experiment that flies aboard NASA’s GGS-Wind spacecraft. This was a burst lasting about half a second, but as it flared, the Canadian Hydrogen Intensity Mapping Experiment (CHIME) and the Survey for Transient Astronomical Radio Emission 2 (STARE2), located at CalTech, detected a Fast Radio Burst (FRB 200428) in the same part of the sky.

Scientists at the Chinese Five-hundred-meter Aperture Spherical radio Telescope (FAST) had been observing SGR 1935+2154 for some weeks. As I understand it, they did not see FRB 200428, but were subsequently able to detect an FRB at the same location (FAST was not observing the object when FRB 200428 was detected by the other instruments).

Citations for papers from both the CHIME/FRB Collaboration and the STARE2 team are given below, along with a citation for a paper from FAST astronomers that provides limits to the radio flux of the FRB. The authors of the latter find a ‘weak correlation’ between FRBs and SGR 1935+2154, as co-author Zhang Bing (University of Nevada) explains:

“The weak correlation could be explained by special geometry and/or limited bandwidth of FRBs. The observations of SGR J1935 start to reveal the magnetar origin of FRBs, although other possibilities still exist.”

So we have a burst of X-rays associated with an FRB, the latter radio component detected first at CHIME and then STARE2. Moreover, the radio burst from SGR 1935+2154 was thousands of times brighter than any radio emissions previously observed from magnetars in the Milky Way, and in fact would have registered as a weak FRB had it occurred in another galaxy. The arrival of the radio pulse during an X-ray burst points to this magnetar as the source.

Paul Scholz is a researcher at the University of Toronto’s Dunlap Institute for Astronomy & Astrophysics and a member of the CHIME/FRB Collaboration:

“The radio burst was far brighter than anything we had seen before, so we immediately knew it was an exciting event. We’ve studied magnetars in our galaxy for decades, while FRBs are an extragalactic phenomenon whose origins have been a mystery. This event shows that the two phenomena are likely connected.” 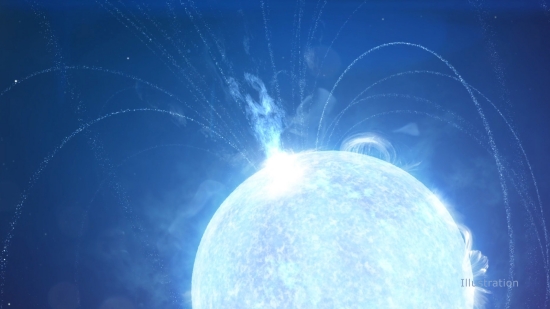 Image: A powerful X-ray burst erupts from a magnetar – a super-magnetized version of a stellar remnant known as a neutron star – in this illustration. A radio burst detected April 28 occurred during a flare-up like this on a magnetar called SGR 1935. Credit: NASA’s Goddard Space Flight Center/Chris Smith (USRA).

The magnetic field of a magnetar can be a thousand times stronger than that of a typical neutron star, offering us a generous source of power, but at the same time, the radio burst from SGR 1935+2154 was thousands of times brighter than any radio emissions ever detected from magnetars in our galaxy. Paul Scholz has speculated that it may require the youngest, most active magnetars to explain the range of FRB sources we’ve thus far observed elsewhere, although we have yet to make a simultaneous detection tying an FRB with an X-ray burst in another galaxy, a signature that efforts like CHIME will continue to look for.

George Younes (George Washington University) is lead author on two upcoming papers on the FRB. Here he speculates on the nature of the burst activity:

“The bursts seen by NICER and Fermi during the storm are clearly different in their spectral characteristics from the one associated with the radio blast. We attribute this difference to the location of the X-ray flare on the star’s surface, with the FRB-associated burst likely occurring at or close to the magnetic pole. This may be key to understanding the origin of the exceptional radio signal.” 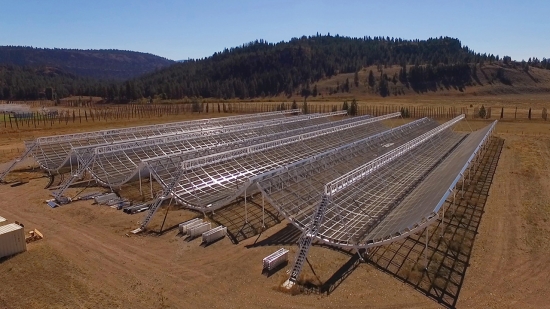 So we have the first FRB found in the Milky Way, one whose association with a magnetar may help us place these bursts in context now that we know magnetars can drive FRB activity. On exactly how a magnetar produces an FRB, I want to quote Amanda Weltman and Anthony Walters, who provide a fine overview of this work in an article in Nature that is not behind the journal’s firewall:

…there are several mechanisms by which magnetars can drive FRBs, each of which has a distinct observational signature. The new results thus open up a host of exciting problems to explore. For example, what theoretical mechanism could give rise to such bright, yet rare, radio bursts with X-ray counterparts? One promising possibility is that a flare from a magnetar collides with the surrounding medium and thereby generates a shock wave. Observations of nearby rapidly star-forming galaxies will be crucial for finding events similar to FRB 200428, to help pin down the actual mechanism.