Across the Brown Dwarf Palette

Something to note about the brown dwarfs we looked at yesterday: Our views on how they would appear to someone nearby in visible light are changing. It’s an interesting issue because these brown dwarfs exist in more than a single type. If you’ll have a look at the image below, you’ll see a NASA artist conception of the three classes of brown dwarf, all of these being objects that lack the mass to burn with sustained fusion. 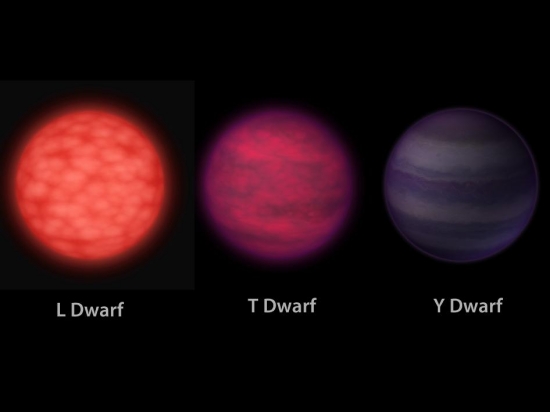 Image: This artist’s conception illustrates what brown dwarfs of different types might look like to a hypothetical interstellar traveler who has flown a spaceship to each one. Brown dwarfs are like stars, but they aren’t massive enough to fuse atoms steadily and shine with starlight — as our sun does so well. Our thoughts on how these objects appear are evolving quickly, as witness yesterday’s discussion, and we’re likely to need another visual rendering of brown dwarf classes soon. Credit: NASA/JPL-Caltech.

One thing should jump out to anyone who read yesterday’s post on the appearance of Luhman 16 B: The artist here does not depict bands of clouds/weather on the object, but rather localized storms of the kind that some researchers believed would characterize brown dwarfs. We know that Luhman 16 A (33 times Jupiter’s mass) is of spectral type L7.5, while Luhman 16 B is categorized as T0.5, putting it near the transition between types L and T. And Luhman 16 B shows strong evidence of banding.

That’s according to Daniel Apai and team, as discussed yesterday, in an analysis based on data from TESS. Looking further at the image above, it’s clear we’re going to be re-working our depictions going forward as we analyze more brown dwarfs. If we should expect a banded object at the L-T transition, then at least the L dwarf and the T dwarf shown here will likely show the same atmospheric pattern (obviously, we’ll need to confirm these speculations with hard data). That would leave the Y dwarf as yet undetermined, and for good reason, as these objects are vanishingly hard to see.

Atmospheric temperatures drop as we move across the types of brown dwarfs here, with the L dwarf being the brightest and hottest in the image; its typical temperatures are in the range of 1400 degrees Celsius. The magenta T dwarf takes us down to about 900 degrees Celsius, but the Y dwarf really drops the reading, with the coldest yet identified having a temperature of a mere 25 degrees Celsius. That’s not all that far off what my thermostat is set on — 72 ℉ — as I try to take the chill off this morning.

All three of the brown dwarfs shown above appear at the same size, a reminder that all types of this object have the same dimension, which is roughly that of Jupiter, despite wide variations in their mass. Same radius, major disparity in mass, in other words. My hopes that we would find one of these fascinating objects at no more than, say, 1 light year seem to have been dashed, although it’s certainly true that Y dwarfs are so cool that finding them is going to be difficult even for the best infrared observatories.

All those non-professional but often highly adept astronomers and volunteers have produced a map with a radius of about 65 light years. The work of 150,000 volunteers has been going on since 2017 using data from the WISE mission under its Near-Earth Object Wide-Field Infrared Survey Explorer (NEOWISE) incarnation. The study was presented at the ongoing virtual meeting of the American Astronomical Society.

Dozens of new brown dwarfs turned up in this work, which drew on data from the now retired Spitzer Space Telescope. Using the Backyard Worlds: Planet 9 results, astronomers consulted data from the space telescope to observe 361 local brown dwarfs of types L, T and Y and combined the results with previously known dwarfs, many of them catalogued by CatWise, the catalog of objects from WISE and NEOWISE. The galaxy’s coldest known Y dwarf is a neighbor (not surprising, given that more distant dwarfs should be below the level of detection), but it turns out that it is comparatively rare, a bit of an anomaly given our expectations of brown dwarf distribution. Of the seven objects nearest to our Solar System, three are brown dwarfs. And the Sun’s position within this cluster of nearby objects is a bit unusual as well, says Aaron Meisner (National Science Foundation NOIRLab), a co-author of the study:

“If you were to put the Sun at a random place within our 3D map and you were to ask, ‘Typically, what do its neighbors look like?’ We find that they would look very different from what our actual neighbors are.”

Again, we have to weigh this outcome against the difficulty in observing Y dwarfs, so conclusions shouldn’t be drawn too hastily. With brown dwarfs having exoplanet dimensions but no companion main sequence star (in most cases), they become useful objects as we refine the tools of exoplanet characterization. The James Webb Space Telescope should be able to tell us more about nearby brown dwarfs, as will the upcoming SPHEREx mission, an all-sky infrared survey scheduled for a 2024 launch.

The paper is Marocco et al., “The CatWISE2020 Catalog,” accepted for publication in the Astrophysical Journal Supplement Series (abstract/preprint).

Next post: Recovering a Triple Star Planet with New Data