NASA’s early afternoon press conference lived up to expectations, announcing two new planetary discoveries in the Neptune-mass range. The planet detected around the star 55 Cancri is one of four now known to orbit there, making 55 Cancri the most complete extra-solar planetary system we’ve found.

Nobody knows whether the new 55 Cancri planet is rocky or gaseous, but its mass — roughly 18 times that of the Earth — and its location close to its parent star have many speculating that it formed through the accumulation of smaller rocky bodies. Barbara McArthur of the University of Texas, Austin and colleagues found the planet by studying observations made at the Hobby-Eberly Telescope at McDonald Observatory in West Texas.

55 Cancri continues to loom large among extrasolar planetary systems. To me, the most interesting of its planets is the fourth, a gas giant that orbits roughly at the same distance that Jupiter does from the Sun. With almost 140 extrasolar planets now found, the variety of planetary systems seems bewildering; finding a system that roughly parallels our own would be in its own way reassuring, and would raise hopes of finding Earth-like worlds in the habitable zones surrounding such stars. We may have to wait for the Terrestrial Planet Finder mission to actually get an image of such a planet, but both Kepler and the Space Interferometry Mission should give us a good idea of what’s likely to be there. 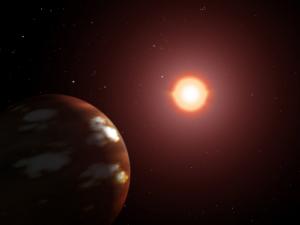 The second planet, depicted in the artist’s rendition above, is a stunner because it orbits an M-class red dwarf called Gliese 436. With seven out of ten planets in the galaxy known to be red dwarfs, the discovery of planets around even a few seems to imply that the population of planets in the galaxy is enormous. Proxima Centauri is itself a red dwarf, and at 260,000 AU (4.2 light years) the closest known star to our Sun. Paul Butler and Geoffrey Marcy of the Carnegie Institute of Washington and University of California, Berkeley made the Gliese 436 discovery, which is the second planet known to orbit a red dwarf. The planet orbits at roughly 4.1 million kilometers (2.6 million miles) from its parent star, and is roughly 20 times Earth in mass.

NASA has a nice animation of the 55 Cancri planetary system here, and you can read more about both discoveries at the Planet Quest Web site.