The Comets of Tau Ceti

At 12 light years away, Tau Ceti is the nearest Sun-like star, and has long been of high biological interest among possible interstellar probe targets. But a British team using the James Clerk Maxwell Telescope in Hawaii (and aided by the world’s most sensitive sub-millimeter camera, called SCUBA) has found a disk of cold dust around the star that bodes ill for stability among any planets that may be orbiting there. 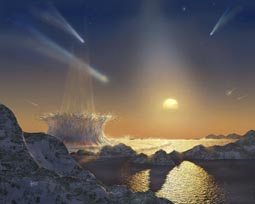 “Tau Ceti has more than ten times the number of comets and asteroids that there are in our Solar System. We don’t yet know whether there are any planets orbiting Tau Ceti, but if there are, it is likely that they will experience constant bombardment from asteroids of the kind that is believed to have wiped out the dinosaurs. It is likely that with so many large impacts life would not have the opportunity to evolve.”

Frank Drake made Tau Ceti a target in his Project Ozma investigations in 1960, the first attempt at radio-based SETI. The recent findings hardly resolve the issue, at least until we’ve learned more about the nature of the dust cloud around Tau Ceti and its dynamics, but Drake’s other target, Epsilon Eridani, begins to look a little more attractive.

Source: Particle Physics and Astronomy Research Council. PPARC is the UK’s strategic science investment agency. See also Greaves et al, “The debris disc around τ Ceti: a massive analogue to the Kuiper Belt,” Monthly Notices of the Royal Astronomical Society, Volume 351, Issue 3, pp. L54-L58. There is an abstract here. A quick but thorough backgrounder on Tau Ceti can be found at the SolStation site.

Next post: Tuning Up the Hunt for Extrasolar Planets