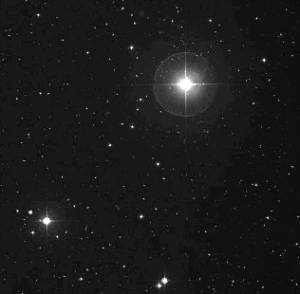 To the left is Epsilon Eridani. At 10.5 light years, it’s a relatively nearby star, and we know it has planets. Can we find a way to view those planets, a way that will show us not just pinpoints of light but surface details?

Missions like Terrestrial Planet Finder promise great things in this regard, but the technology that will fly on them is still being determined. To my mind, the most promising technique for viewing Earth-like planets around other stars is Webster Cash’s New Worlds Imager. Discussed previously in these pages, New Worlds Imager can be described as an enormous pin-hole camera in space. An opaque starshade the size of a football field would contain a single aperture, a hole some 30 feet in diameter. Tens of thousands of miles away, a detector spacecraft would study the resultant light, with the planetary system of the target star spread out widely for study.

Cash, a professor in the University of Colorado at Boulder’s astrophysical and planetary sciences department, says the pinhole camera gives you an all but perfect lens. “This device would remove the limiting problem of light scattered from the parent star due to optical imperfections.”

When I talked to Cash last year while researching Centauri Dreams, he explained the New Worlds Imager concept in detail:

“We’re envisioning literally some kind of a large umbrella, with an aperture in it. Tens of thousands of kilometers away you build a standard telescope, a Cassegrain instrument with an aperture the same size as the pinhole. Then you ‘fly around’ the planetary system; you don’t actually image it. You look back at the first spacecraft, which looks like a pinhole with a dark region around it from that distance. That dark region suppresses all kinds of background, and you see only the planet light if you were in the right place to see the planet. Move from there to the right place in the focal plane and you can see the central star.”

That’s the basic Imager, capable of detecting planets as small as Earth’s moon around other stars, mapping a planetary system down to one-hundredth of an astronomical unit, and searching for biomarkers like methane, water, oxygen and ozone. The Imager could map the rotation rate of planets and detect the presence of liquid oceans.

But in its advanced form, with a fleet of sunshades doing exquisite formation flying for interferometry purposes, things really begin to get interesting. Now we’re talking close-up images. Says Cash, in a University of Colorado press release:

“In its most advanced form, the New Worlds Imager would be able to capture actual pictures of planets as far away as 100 light-years, showing oceans, continents, polar caps and cloud banks… If extra-terrestrial rainforests exist, they might be distinguishable from deserts.”

Imagine tracking a cold front across the face of a continent on a planet orbiting Epsilon Eridani. On the one hand, it sounds like science fiction. On the other, it’s what NASA administrator Dan Goldin once talked about as he imagined the schoolroom of the future:

“When you look on the walls, you see a dozen maps detailing the features of Earth-like planets orbiting neighboring stars,” Goldin said. “Schoolchildren can study the geography, oceans, and continents of other planets and imagine their exotic environments, just as we studied the Earth and wondered about exotic sounding places like Banghok and Istanbul . . . or, in my case growing up in the Bronx, exotic far-away places like Brooklyn.”

The good news is that NASA’s Institute for Advanced Concepts has now agreed to fund a Phase I study of New Worlds Imager, which is one of twelve proposals chosen September 28 (more on NIAC and the other proposals tomorrow). Cash’s credentials were already impressive before New Worlds Imager surfaced. In 1999, he led a team that NIAC funded to investigate x-ray telescopes to study black holes. That work has turned into a mission NASA now calls MAXIM, to be launched in the next decade. Cash’s new NIAC study puts New Worlds Imager at least one step closer to reality, with the potential for a Phase II study — and further funding — still very much alive.

Centauri Dreams‘ take: long before we’re ready to send an interstellar probe anywhere, we’ll want thorough maps of neighboring star systems. The technologies proposed for missions like Terrestrial Planet Finder have significant drawbacks. A coronagraph that could mask the light of a central star, for example, and show the kind of detail New Worlds Imager would provide would have to use a mirror surface flat to within a single atom. New Worlds Imager is a startling concept that makes real-world sense, using technologies we already possess or can develop in a reasonable time. It could be a key development as we begin extrasolar planetary exploration.

Cash and other scientists working on the project presented New Worlds Imager (then called New Worlds Observer) in a talk to the American Astronomical Society in January of 2004. You can find presentation slides and PDFs of two posters used at the meeting here.