If planets form the way we used to think — in a relatively smooth condensation out of material surrounding young stars — then the dust discs from which they form should gradually fade from view. Planetary formation, in other words, should scour a solar system, leaving it relatively free of dust; other than their planets, older stars would show little signs of the material from which their systems were made.

But NASA’s Spitzer Space Telescope, working in the infrared, is telling a different tale. Studying the dusty discs around 266 nearby stars — all similar in size but varying in age — George Rieke of the University of Arizona, Tucson and colleagues have found 71 discs, presumably containing planets. And there goes the old theory, because within the first two hundred million years of a star’s life, there is no necessary correlation between the density of the disc and the star’s age. 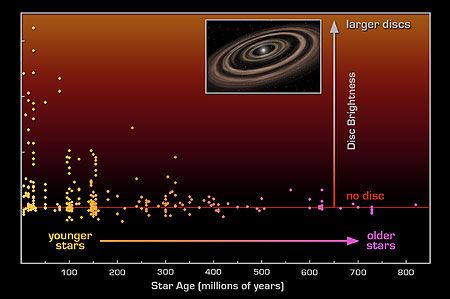 Image: The graph above shows the Spitzer findings. Along the vertical axis is the brightness (or size) of the disc), plotted against the age of the stars on the horizontal. You can see that huge amounts of debris persist around stars that are 100 to 200 million years old. Yet even among some of the youngest stars, no debris appears. The upshot: the collision rate between rocky objects in these systems varies widely from star to star. Credit: Credit: NASA/JPL-Caltech/G. Rieke (Univ. of Arizona).

Collisions between large objects may continue to infuse planetary discs with dust, up to hundreds of millions of years after the host star was formed. And planetary formation may be chaotic indeed, taking far longer than the 10 million years previously assumed by some theories. “It’s a mess out there,” adds Rieke. “We are seeing that planets have a long, rocky road to go down before they become full grown.”

More about these findings at the Spitzer telescope’s Web site. And here’s a San Francisco Chronicle story on the subject.

Next post: An Antimatter-Driven Sail to the Kuiper Belt