A View of Xanadu

We’ll soon have many more images, but for now, this view of Titan taken on the 24th may give a foretaste of what’s to come. Here’s the image, along with NASA’s description, of the extraordinary feature that recalls Coleridge:

In Xanadu did Kubla Khan
A stately pleasure-dome decree:
Where Alph, the sacred river, ran
Through caverns measureless to man
Down to a sunless sea. 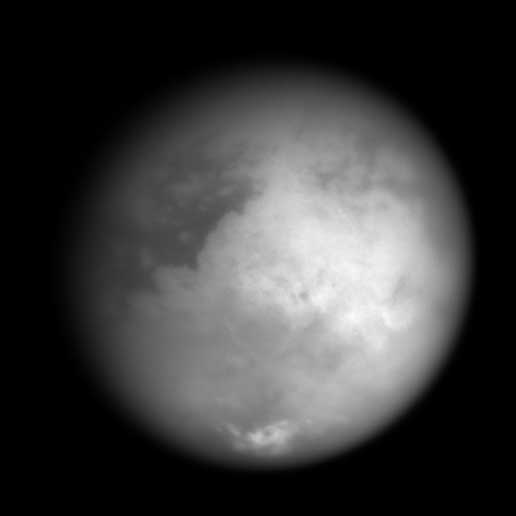 “This image taken on Oct. 24, 2004, reveals Titan’s bright “continent-sized” terrain known as Xanadu. It was acquired with the narrow angle camera on Cassini’s imaging science subsystem through a spectral filter centered at 938 nanometers, a wavelength region at which Titan’s surface can be most easily detected. The surface is seen at a higher contrast than in previously released imaging science subsystem images due to a lower phase angle (Sun-Titan-Cassini angle), which minimizes scattering by the haze.

“The image shows details about 10 times smaller than those seen from Earth. Surface materials with different brightness properties (or albedos) rather than topographic shading are highlighted. The image has been calibrated and slightly enhanced for contrast. It will be further processed to reduce atmospheric blurring and to optimize mapping of surface features. The origin and geography of Xanadu remain mysteries at this range. Bright features near the south pole (bottom) are clouds. On Oct. 26, Cassini will acquire images of features in the central-left portion of this image from a position about 100 times closer.” Credit: NASA/JPL/Space Science Institute.

Titan isn’t sun-less, and we’re not exactly positive about those seas, but today’s close pass by Cassini should provide plenty to talk about. More on the Cassini home page.