Astronomers from Japan’s Ibaraki University, the Japan Aerospace Exploration Agency, the University of Tokyo, and the National Astronomical Observatory of Japan have analyzed the dust disk surrounding the star Beta Pictoris, with intriguing results. Using an instrument called the Cooled Mid-Infrared Camera and Spectrometer (COMICS) and the Subaru telescope, the team found that ring-like distributions of planetesimals (something like the asteroid belt in our own Solar System) occur at three locations, measured as 6, 16 and 30 AU from the star. An unseen planet some 12 AU from the star may be what is keeping these belts intact. 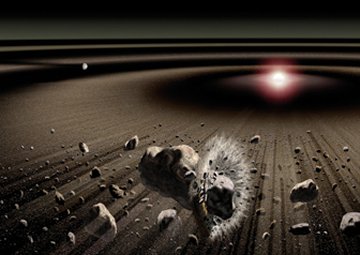 The disk around Beta Pictoris, a young star whose disk is more or less edge-on to our solar system, has been studied for some twenty years. Working in the infrared, Yoshiko K. Okamoto of Ibaraki University in Japan and his colleagues have provided new details of its structure.

What apparently keeps these rings of dust replenished are repeated collisions between planetesimals in the debris belts. We’re looking at the structure of a planetary system in the making; our own early solar system may well have grown through similar collisions. The Beta Pictoris results have already been published in Nature: Okamoto, Y. K. et al. “An early extrasolar planetary system revealed by planetesimal belts in Beta Pictoris,” Nature, Vol. 431, pp.660-663 (2004).

The Subaru instrument is an 8.2 meter optical-infrared telescope at the summit of Hawaii’s Mauna Kea. . Here is an article on the Beta Pictoris find in Science News.