A Cassini close encounter news briefing will be available on NASA TV at 12 PM EST today. Live interviews on the Titan flyby will appear in segments from 3 to 7 PM EST this afternoon. A science briefing occurs tomorrow at 12 PM EST (all programs subject to change without notice, adds NASA).

For more, check both the Cassini-Huygens home page and the Cassini Imaging Team page. Also, a nice interview with Jonathan Lunine, of the Lunar and Planetary Laboratory at the University of Arizona, is here. Back to the usual interstellar rounds soon, but for now, Titan is too fascinating to ignore. 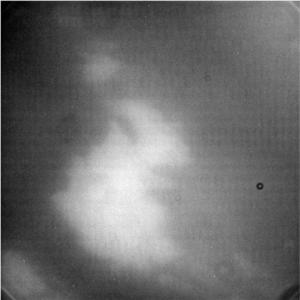 This image is one of the closest ever taken of Saturn’s hazy moon Titan. It was captured by Cassini’s imaging science subsystem on Oct. 26, 2004, as the spacecraft flew by Titan. At its closest, Cassini was 1,200 kilometers (745 miles) above the moon, 300 times closer than during its first flyby on July 3, 2004. Credit: NASA/JPL/Space Science Institute.

A few salient facts: Cassini came within 1200 kilometers (750 miles) of Titan’s surface. At the time of the encounter, the spacecraft was 1.3 billion kilometers (826 million miles) from Earth, making for a transit time of 1 hour 14 minutes for data to arrive.

Says Mark Leese, a member of the Huygens team at the Open University (UK), who are involved in the Science Surface Package (SSP) and the Huygens Atmospheric Instrument (HASI):

“The combination of images, spectrometer measurements and RADAR data from this close flyby should help to prepare us for the [Huygens] mission ahead. In addition, Cassini’s measurements of the atmosphere should confirm that the Titan atmosphere model used to design the probe entry system is correct.”