The Planetary Society has announced that its Cosmos 1 solar sail is to be launched on March 1, 2005. A letter to members from executive director Louis Friedman, who worked on NASA sail designs for an aborted Halley’s comet mission in the 1970s, called Cosmos 1 ‘the world’s first solar sail spacecraft.’ And indeed it is, if by ‘spacecraft’ we mean ‘free-flying vehicle.’ The first Russian Znamya experiments with sail deployment are over a decade old, and involved a 20-meter spinning sail-mirror. 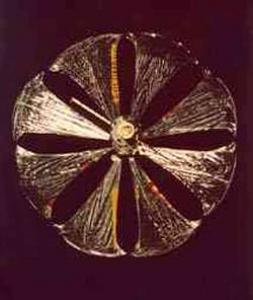 Although Znamya was intended to demonstrate the practicality of beaming solar energy to polar and subarctic settlements, the design pointed to a larger concept. When I talked to him last year at JPL, NASA sail expert ‘Hoppy’ Price showed me a photograph of the deployed sail-mirror, which had problems. “…there are these wrinkles in the sail, so it didn’t really work quite the way it was supposed to work,” Price said. “And it was a lot heavier than what we’d like to build. But the more we study this, the basic configuration—for a large spin-stabilized sail that would be very low in mass—is a promising one.”

Image: The Znamya sail-mirror, the first space-based deployment of sail technologies. Earlier missions, like Mariner 10, had verified the effect of photon propulsion, but were not specifically designed to do so.

Znamya involved a sail that remained anchored to a Progress supply ship (a second Znamya deployment six years later failed when the sail became entangled with a spacecraft antenna). Cosmos 1 will indeed be an independent spacecraft, one that will test the basics of photon propulsion by maneuvering to a higher orbit. Each of its eight triangular blades can be pitched, varying the angle to change the pressure of reflected sunlight. If all goes well, the team will also try to illuminate the sail with a microwave beam to measure the acceleration on the spacecraft.

Centauri Dreams‘ take: Cosmos 1 is a proof of concept mission that stands out in two areas. First, it should awaken public attention to solar sail designs at a time when agencies like NASA and ESA are actively working on sail dynamics. Second, Cosmos 1 was built and will be launched without government funding, ‘the first space mission of a public interest organization,’ as The Planetary Society’s Cosmos 1 page puts it. On both counts the mission is fascinating; anyone interested in advanced propulsion concepts must wish it well.