By the Light of a Passing Star

Microlensing Planet Finder is a proposed mission that would use the gravitational lensing effect to achieve extraordinary detection capabilities. As presented in The Microlensing Planet Finder: Completing the Census of Extrasolar Planets in the Milky Way (PDF warning), MPF could find planets down to 0.1 Earth mass, in locations as close as 0.7 AU to their parent stars. And unlike any other planet-finding technology, MPF would be able to find free-floating planetary bodies unassociated with any star.

Gravitational microlensing is perhaps the most exotic planet-finding technique. A star or planet can act as a kind of lens, magnifying a more distant bright star behind it. It is the gravitational field of the foreground star that, as Einstein predicted, focuses the light of the distant star, just as a glass lens focuses light in a telescope. By analyzing the light produced by such an event, astronomers can find telltale anomalies that indicate the presence of planets around the foreground star.

And the method works. Last April a new planetary system was found in the constellation Sagittarius, some 17,000 light years away. The planetary system, consisting of a planet 1.5 times as large as Jupiter orbiting a red dwarf at about 3 AU, acted as a magnifying lens for a background star some 24,000 light years away in the direction of the galactic core. What scientists saw was a brightening that indicated the foreground star was affecting light from the object behind it. The fact that they observed two spikes of brightness rather than one indicated the presence of the planetary companion around the nearer star. An analysis of the light curve showed that the smaller object was only 0.4 percent of the mass of the red dwarf. 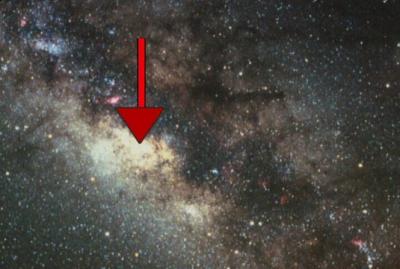 Image: The location of the new discovery near the center of our Milky Way galaxy. The images span a 120-day period in which the star became much brighter due to microlensing. There were two spikes in brightness, indicating that the passing star had a planet in orbit around it. The “lens” or foreground star and planet are 17,000 light-years away in the constellation Sagittarius, while the background star is 24,000 light-years away. Credit: NASA/JPL-Caltech.

The kicker is that, for gravitational microlensing to work, stars have to be aligned almost perfectly. That means huge numbers of stars have to be monitored, a fact the Microlensing Planet Finder would obviate by focusing on the packed starfield in the direction of the Milky Way’s center. David Bennett, Ian Bond et al., authors of the paper cited above, summarize MPF’s goals:

• Provide the first census of planets like those in our own solar system, with sensitivity to analogs of all solar system planets except for Mercury and Pluto.
• Discover 66 terrestrial planets, 3300 gas giants, and 110 ice giant planets (if our solar System is typical).
• Discover Earth-like planets at 1-2.5 AU from their stars even if only a few per cent of stars have such planets.
• Discover Earth-like planets within a few months of launch.
• Discover free-floating planets, not gravitationally bound to any star.
• Provide direct measurement of star:planet mass ratios, plus planet masses and separations for planets orbiting solartype stars.

The authors believe that MPF and the upcoming Kepler mission would work together to “…provide measurements of the frequency of Earth-like and larger extrasolar planets at all star:planet separations and will complete the first census of extrasolar planets like those in our own Solar System.”

For more on gravitational imaging and the Sagittarius discovery, see this excellent JPL animation. A Notre Dame press release covering David Bennett’s work in the Sagittarius find can be found here.

Next post: An Anomaly from the Edge of the Solar System