The Challenge of Spacecraft Robotics

Is any unmanned spacecraft a robotic probe? You might think so, given the tasks the hardware has to perform to accomplish a given scientific mission, but a more precise definition came out of the European Space Agency’s ASTRA 2004 workshop, held in the Netherlands early in November. Says Gianfranco Visentin, head of ESA’s Automation and Robotics Section, a space robot is “…a system having mobility and the ability to manipulate objects plus the flexibility to perform any combination of these tasks autonomously or by remote control.”

And according to this ESA press release, spacecraft robotics should be able to achieve the following:

We’re gaining a lot of experience with robots through the use of machines like NASA’s Mars rovers Spirit and Opportunity, which continue to set records for longevity and scientific discovery on the Red Planet. ESA’s own Aramies/Scorpion robot is an eight-legged rover that may go NASA one better, by providing a range of motion that can help it operate in extremely rugged terrain. 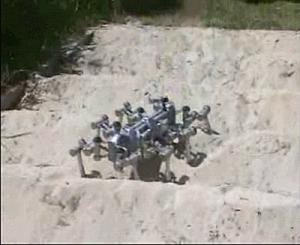 But the problems faced by all space robotics are amplified hugely when we start talking about the long time frames demanded of interstellar missions. Even a forty-year journey to the Oort Cloud, which is about as far as we can reasonably extrapolate a mission we could design in the near future, would involve issues like radiation, which can cause errant behavior in electronic systems, even those specifically hardened for the environment. Thermal conditions test the mettle of any spacecraft, and communications delays make increasing autonomy essential. A probe in orbit around Centauri A would face an 8.6 year round-trip communications delay; autonomy thus becomes the sine qua non of any true interstellar attempt.

“We are continuing,” says Visentin, “to do research into new types of robots which can cope with the special conditions in space, go where humans cannot and help astronauts manage the huge amount of work on the International Space Station.” All of which needs to be supplemented in the area of long-life electronics, redundancy, radiation hardening and artificial intelligence, a huge wish list that, just as much as the propulsion conundrum, could make interstellar robotic probes the driver for advances across the technological spectrum.