The nuclear-electric mission to Neptune discussed here on the 14th is one of two now being studied by NASA. The other is powered by chemical rockets and, like Cassini, would use gravity assists to reach Neptune in considerably less time. Its team, led by Andrew Ingersoll of the California Institute of Technology, is working on a design that, like University of Idaho professor David Atkinson’s nuclear-electric mission, will be submitted to NASA in mid-2005.

A faster mission has many advantages, but a major question arises: how do you stop when you get there? Unlike Voyager, the Neptune missions are to be capable of orbiting the planet and dispatching probes to both it and its largest moon, Triton. One answer Ingersoll’s team is studying is aerocapture, which uses the destination planet’s atmosphere to alter the spacecraft’s trajectory, putting it into orbit after a single pass. 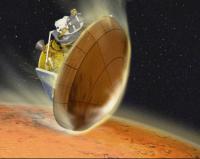 If this sounds familiar, you may recall the aerocapture maneuver in the film 2010, a spectacular, flaming arrival at Jupiter that used a heat shield and pinpoint positioning to brake the spacecraft into a circular orbit. NASA has been studying aerocapture for a long time, though at present its experience with actual missions has been limited to a milder variant called aerobraking; the broader term for all these maneuvers is aeroassist. The Mars Climate Orbiter has already proven aerobraking; the spacecraft circularized the elliptical orbit its chemical rocket put it in around Mars by using drag from the atmosphere on its solar array. Doing this for hundreds of orbits resulted in a circular path around the planet.

When I talked to NASA’s Les Johnson at Marshall Space Flight Center in Huntsville about aerocapture, he called the procedure ‘aeroassist on steroids.’ Johnson is manager of NASA’s In-Space Propulsion Program. More than most technologies, aerocapture is destination-dependent; Johnson told me that both Neptune and Titan are possible candidates for its use because of their interest and their great distance. For the outer planets, the beauty of aerocapture is that you need carry no fuel to get yourself into orbit at destination. Another key advantage: it allows a much faster trip time.

If you look at the systems studies, you see that if you don’t have to carry all that fuel with you, you can can add science payload. And your launch vehicle can be smaller because it doesn’t have as much weight to throw. Finally, your trip time is reduced because when you’re traveling interplanetary distances and have to slow down to capture, you spend half your time thrusting and half your time slowing down. Forget that with aerocapture; you do all your slowing down in a thirty minute maneuver at destination.

Of course, it’s a spectacular, nail-biting arrival. But when I asked Johnson how tight the parameters were for the maneuver, his answer surprised me:

Our people have some convincing data that the entrance corridors are wide so that if you miss your mark in the atmosphere you have a lot of flexibility for correcting as you proceed. That the integrity of the ablaters and the materials — the thermal protection we’ll need — is going to be tolerant and will be able to do the capture.

So armed with aerocapture and gravity assists, the Ingersoll team may have an edge when it comes to speed. On the other hand, the nuclear-electric technologies Atkinson envisions would allow for bigger payloads and more power resources available during the spacecraft’s primary mission around Neptune; this is what NASA’s Project Prometheus is all about.

We’ll be tracking both these designs as they evolve into final reports. In the meantime, a good backgrounder on all the aeroassist methods can be found at this NASA page. Image credit (above): NASA.