Cassini’s most interesting view of Titan’s atmosphere to date is shown here, highlighting what appears to be layer after layer of haze. The image is in the ultraviolet and taken from Titan’s night side; the haze layers extend several hundred kilometers above the surface. The region shown here is in Titan’s equatorial region, about 10 degrees south latitude. 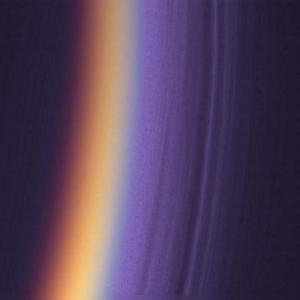 A nice wrap-up of Cassini data from both Titan and Dione, as presented at the American Geophysical Union’s fall meeting in San Francisco, can be found on this JPL page. Especially noteworthy is the peculiar, braided character of the fractures on Dione’s surface, where the terrain consists of ice cliffs apparently created by tectonic forces. “This is one of the most surprising results so far. It just wasn’t what we expected,” said Dr. Carolyn Porco, Cassini imaging team leader (Space Science Institute, Boulder, CO).

We are now just three days away from the separation of the Huygens Titan probe from the Cassini orbiter, with descent to Titan’s surface planned for January 14.