The Huygens probe separation from the Cassini Saturn orbiter is scheduled to occur late this evening; according to this JPL press release, NASA expects a confirmation of the maneuver around 11 PM EST. The probe, which has been attached to Cassini for the seven-year trip to Saturn, has remained in sleep mode except for periodic ‘awakenings’ every six months to test its instruments. This evening, Huygens will be pushed away from the orbiter by tension-loaded springs and will begin its solo journey toward Titan, which it is expected to reach on January 14.

Both Huygens and Cassini are at this point on an impact trajectory with Titan, to ensure the accuracy of the probe’s arrival at the moon. On December 27, Cassini will change its course, putting it into proper position for radio communications during the probe’s descent.

The best source for Huygens information is either ESA’s Cassini-Huygens page or NASA’s Cassini page. The Cassini imaging team page is also well worth checking. 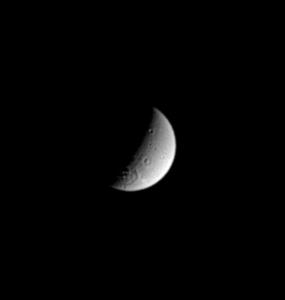 While we’re waiting for the Huygens/Cassini separation, here’s a recent image of Dione.

Image: Saturn’s cratered moon Dione displays a large impact basin near its south pole in this Cassini spacecraft image. The topographic features that extend radially away from the basin could be secondary craters or tectonic grooves related to the impact. Dione is 1,118 kilometers (695 miles) across.

This view shows principally the leading hemisphere of Dione. The image was taken in visible light with the Cassini spacecraft narrow angle camera on Nov. 2, 2004, at a distance of 2.1 million kilometers (1.3 million miles) from Dione and at a Sun-Dione-spacecraft, or phase, angle of 100 degrees. North is up. The image scale is 13 kilometers (8 miles) per pixel. The image has been magnified by a factor of two and contrast enhanced to aid visibility of surface features. Image and caption credit: NASA/JPL/Space Science Institute.