The Huygens probe, captured in the photograph below as it departs from the Cassini Saturn orbiter, is now on course for its January 14th descent into Titan’s atmosphere. Look for the probe in the upper right quadrant of the image. Huygens’ separation from Cassini was achieved by firing explosive bolts; the probe was then pushed away by springs and rollers at roughly one foot per second. 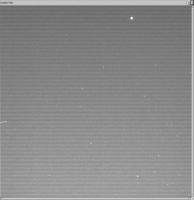 Image: The Cassini spacecraft snapped this image of the European Space Agency’s Huygens probe about 12 hours after its release from the orbiter. The probe successfully detached from Cassini on Dec. 24, 2004, and is on course for its January 14 encounter with Titan. Credit: NASA/JPL.

The journey to Titan’s surface should be quite a ride. According to this European Space Agency release, the probe will enter the atmosphere on Titan’s day side over its southern hemisphere. After the main parachute deploys, the probe will extend its instrument booms and begin collecting data about the moon’s atmosphere. The descent is expected to take fully 2 1/2 hours, with the probe relaying its data to the Cassini orbiter, which will then be flying over Titan at about 60,000 kilometers (37,000 miles). Once on the surface, assuming it survives the impact, Huygens may be able to send data to Cassini for as long as the orbiter is visible over the horizon at the landing site, a maximum time of a little over two hours. Cassini will transmit whatever it receives from the surface to the Deep Space Network and on to the European Space Agency’s operations complex in Darmstadt, Germany.

Ponder the distances involved for routing such data: Cassini’s signal confirming the Huygens separation took 68 minutes to make the journey from Saturn-space to Earth. Targets like Neptune will require correspondingly longer round-trip times, making spacecraft automation the key to our exploration of the outer planets. Ever more sophisticated robotic systems will be needed as we push past the ‘ice giant’ planets and head for the Kuiper Belt. At 4.3 light years, Centauri A and B will require a level of spacecraft automation that includes software that can evolve to meet mission demands and components that are capable of extensive re-design and self-replication.

Today the Cassini orbiter will change course to avoid following Huygens into Titan’s atmosphere, placing it on the right trajectory for optimal communications during the Huygens descent.