Iapetus Flyby Next for Cassini

Cassini’s post-Huygens separation maneuver occurred without incident on December 27. The course change was needed both to prevent Cassini from following the free-falling Huygens probe into Titan’s atmosphere and to set up the required positioning for communications between Cassini and Huygens during the latter’s atmospheric entry and descent.

Cassini will make a close pass of Iapetus on December 31, and it should be worth watching. Iapetus (pronounced eye-APP-eh-tuss) is the third-largest of Saturn’s moons, and it has already gained notoriety because of contrasts in its surface; one side is almost snow-bright, the other dark as tar. This has led to speculation that the surface is undergoing continual resurfacing due to processes that have yet to be identified. 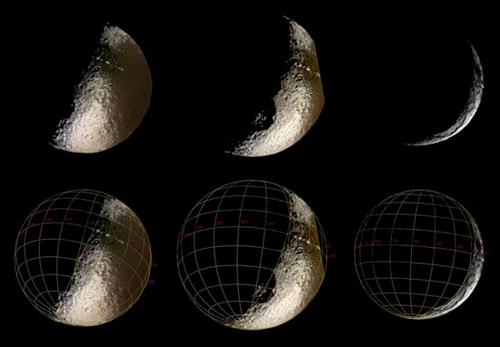 Above: Images obtained using ultraviolet (centered at 338 nanometers), green (568 nanometers) and infrared (930 nanometers) filters were combined to produce the enhanced color views at left and center; the image at the right was obtained in visible white light. The images on the bottom row are identical to those on top, with the addition of an overlying coordinate grid. Credit: NASA/JPL/Space Science Institute

The images above are the best yet obtained for Iapetus. Note the impact craters in the bright areas and the transitional zone between bright and dark. A line of mountains appears in the images to the left (also on the eastern limb in the images at the right). According to this JPL press release, “These mountains were originally detected in Voyager images, and might compete in height with the tallest mountains on Earth, Jupiter’s moon Io and possibly even Mars. Further observations will be required to precisely determine their heights. Interestingly, the line of peaks is aligned remarkably close to the equator of Iapetus.” Current thinking at the Jet Propulsion Laboratory is that the circular feature in the southern hemisphere is an impact crater.

Next post: SETI Institute’s Shostak on the Allen Telescope Array