The dark terrain of the Cassini Regio on Iapetus will be the imaging target of the Cassini Saturn orbiter as it whisks past the moon at 2 kilometers per second later today. The Jet Propulsion Laboratory has released this map of the image coverage area. The regions Cassini will view at different imaging scales are shown within colored lines. These images were taken by Voyager in 1981; expect Cassini to deliver much better resolution, not only because of its superior optics, but also because of distance; Voyager passed Iapetus at over half a million miles, while Cassini will close to 76,700 miles (123,400 kilometers). 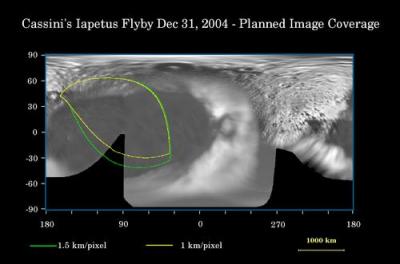