The first images coming back from Titan are raw (i.e., unprocessed), and we’ll have more (up to 350, apparently) available soon. The first picture shows what appear to be drainage channels, as you can see below.

This is one of the first raw, or unprocessed, images from the European Space Agency’s Huygens probe as it descended to Saturn’s moon Titan. It was taken with the Descent Imager/Spectral Radiometer, one of two NASA instruments on the probe. Credit: ESA/NASA/University of Arizona 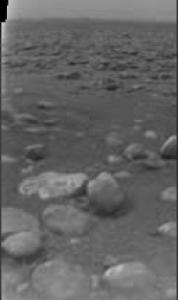 The second image (via Emily Lakdawalla in Darmstadt) seems to be from the surface. Notice the rounded rocks, perhaps evidence of erosion from some kind of liquid (though I notice JPL is calling these ice blocks rather than ‘rocks’). Now comes the fun part: we’ll be getting details and more images all night long and unravelling the data will take months. What a story, and what a triumph for ESA, NASA and the Italian Space Agency!