New Images and Audio from Titan

Of all the Titan images released so far, this one may be the most provocative. Surely these are drainage channels, and is it possible we’re looking at a coastline in the lower part of the picture? Is there still liquid out there? If so, it’s not water but liquid methane or ethane, and it may have drained long ago into the surface. Months of analysis will be needed before we start getting answers to such questions. The image was taken at approximately 8 kilometers altitude. Note what may be fog near the ‘shoreline.’ 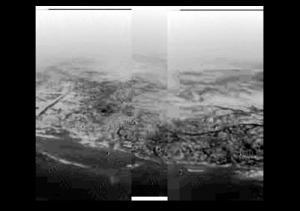 More images from ESA are here.

The Huygens Atmospheric Structure Instrument (HASI) recorded the sounds of Huygens’ descent, now available online. A member of the HASI science team describes the descent audio as including a ‘lot of acoustic noise,’ which I assume refers to the sound you would have heard within the probe during the descent; the audio is incomplete, but the probe seems to be swinging back and forth in a strong wind.

And the only bad news, which may be remediable (via Emily Lakdawalla in Darmstadt):

There was some glitch somewhere–some mistake made, into which there will be a formal ESA inquiry–that resulted in the complete loss of one of two “channels” on which Huygens was sending data to Cassini. These were supposed to be two fully redundant systems, but a couple of the experiments depended on both channels working, in particular the Doppler Wind Experiment. This experiment relied on the Doppler shift of the carrier signal being transmitted from Huygens to Cassini and also to the Earth to reconstruct a vertical wind profile of Titan’s thick atmosphere. The Cassini component of this experiment was lost because, apparently, Cassini just wasn’t listening.

Fortunately for the Doppler Wind Experiment, though, radio telescopes all over Earth were listening, and even more fortunately, they were able to hear Huygens’ signal loud and clear. So although they lost the data set they wanted, they will be able to recover their investigation’s goals by using the radio telescope data. It will take “an enormous amount of work,” ESA Science Director David Southwood told us, but “scientists love work. That’s what they live for.” (I’m sure that the DWE team would say, though, that they could have done with a little less work, thank you.)