Planet Formation Around Nearby Red Dwarfs

M-class red dwarf stars are unusually interesting. For one thing, they make up 70 percent of all stars in our galaxy, meaning the great bulk of stars are much less massive than our Sun and far less bright, not to mention being considerably longer-lived. For another thing, the closest known star, Proxima Centauri, is a red dwarf, so anything we could learn about planetary formation there or around other nearby red dwarfs would be all to the good. 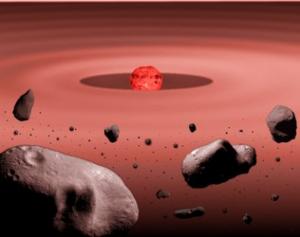 But that’s just it — we know very little about what’s happening around red dwarfs. Attempts to find planets around Proxima Centauri have thus far come up short. Best known is a 1994 study that was suggestive (but not conclusive), of a near Jupiter-sized planet orbiting closer than the distance of Mercury to our Sun. Later Hubble data was also no more than suggestive, while observations at the European Southern Observatory found no evidence for planets as large as Jupiter, though remaining moot on the question of smaller worlds.

Now a team of UCLA astronomers has approached the red dwarf question from another angle. They began with a curiosity in past observations: almost none of the debris disks we’ve thus far found (and we’ve found many) have circled red dwarfs. Since our models of planetary formation suggest that planets grow out of primordial debris disks around stars, we should expect such disks around red dwarfs. But only AU Microscopium (AU Mic) and GJ 182 fit the bill. All other red dwarfs studied have lacked significant disks.

The UCLA team sampled nearby red dwarfs with the Long Wavelength Spectrometer, an infrared camera at the Keck Observatory on Mauna Kea. None showed any evidence of warm dust. The new theory that grew out of this work: red dwarfs have stronger magnetic fields than other stars, and correspondingly stronger stellar winds (particles pushed from the star by magnetic fields at hundreds of kilometers per second). It is the strong stellar wind that removes all traces of planetary formation around red dwarfs, even though the planets may indeed be there.

The ‘missing disk’ paper was presented at the American Astronomical Society’s recent meeting in San Diego. For more, see this UCLA news release.