Exactly how big is the Solar System? We used to talk about Pluto as the outermost planet, implying the Solar System ended when you crossed its orbit. Now we talk in terms of the Kuiper Belt, a band of debris and planetesimals far beyond Pluto’s orbit; beyond the Kuiper Belt looms the vast Oort Cloud, a spherical halo of comets that may extend a light year from our Sun. And if one thing is clear from current research, it’s that our old notions of boundaries have to be readjusted.

Take recent work at the Southwest Research Institute, which shows that the process of planetary formation once extended far beyond the orbit of Pluto. As reported in the January 2005 issue of The Astronomical Journal, SwRI’s Alan Stern used planetary formation software to explore how objects like Sedna, a huge planetoid fully 2/3 the diameter of Pluto, could have formed at distances from 75 AU to 500 AU. The two distances represent Sedna’s closest approach and farthest distance from the Sun. 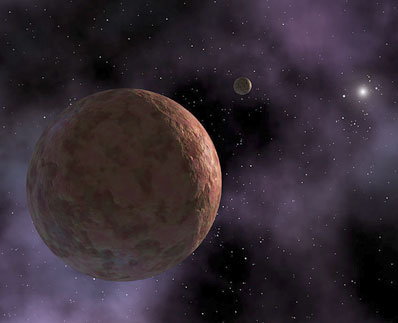 “The model calculations found that objects as large, or even larger, than Sedna could easily form in circular orbits at distances of 75 to 500 AU,” says Stern, “and that their formation time could have been fairly short — just a few percent the age of the solar system. If Sedna did form this far out, it is likely to be accompanied by a cohort of other large planetoids in this very distant region of the solar system. One telltale sign that these objects were formed where they are, rather than in another location, would be if a good fraction of them are on near circular orbits.”

Note the word ‘circular’ in the above quote. Most astronomers agree that Sedna could not have formed in its present highly elliptical orbit because it would have experienced the kind of violent collisions that would prevent the growth of small objects. What Stern has done is to show that Sedna, however it achieved its later orbital eccentricity, could have formed by natural processes within our Solar System, rather than being captured from a passing star or being ejected from an orbit much closer to the Sun. Another implication is that planet formation operated across a much wider area than previously thought. The Solar System’s boundaries may have been extended again.