How do solar systems form? The traditional model has been a slowly condensing cloud of matter within which planetary objects eventually emerge. But that view has been challenged sharply by Yunbin Guan and Laurie Leshin, from Arizona State University. Last year Leshin argued that our own system formed from the violent processes of star-birth within a dense nebula, one filled with supernova activity. Now a new meteorite find has provided solid backing for the idea. 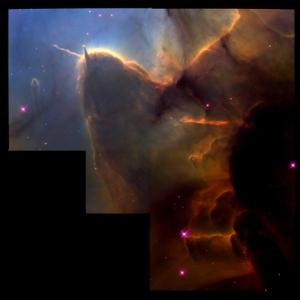 Working with a team from the Chinese Academy of Sciences, Leshin and Guan have found evidence of chlorine-36 in a meteorite that was formed shortly after the solar system appeared. Although chlorine-36 has a short half-life, it decays into sulphur-36, providing strong evidence for the past presence of the earlier form of chlorine, which would have been formed in the explosion of a supernova. The team found sulphur-36 in association with sodalite, a mineral rich in chlorine.

“There is no ancient live chlorine-36 in the solar system now,” said Leshin, who is director of ASU’s Center for Meteorite Studies. “But this is direct evidence that it was here in the early solar system.”

Image: The Triffid Nebula, perhaps the birthplace of solar systems much like our own. Credit: NASA/HST/Jeff Hester.

For Leshin’s earlier work on iron-60 and the supernova hypothesis, see Hester, Desch, Leshin et.al., “The Cradle of the Solar System,” Science 21 May 2004; 304: 1116-1117. The chlorine-36 work will be published in Proceedings of the National Academy of Sciences in February; there is an online abstract here, and you can get further details from this Arizona State press release.

Next post: Did a Collision Create Pluto’s Moon Charon?