One way to explain the existence of the Moon is through a giant collision, one that tore off enough material to build a satellite in a planetary orbit. Can Pluto and its moon Charon be explained the same way? Robin Canup thinks so. Canup is assistant director of Southwest Research Institute’s Department of Space Studies; she argues the case in the January 28 issue of Science.

The Moon may seem large in our skies, but it makes up only about 1 percent of Earth’s mass. Charon, on the other hand, is 10 to 15 percent the mass of Pluto, which suggests to Canup that the corresponding collision must have been with an object almost as large as Pluto itself. She also believes that Charon probably formed intact as a result of the collision.

“This work suggests that despite their many differences, our Earth and the tiny, distant Pluto may share a key element in their formation histories. This provides further support for the emerging view that stochastic impact events may have played an important role in shaping final planetary properties in the early solar system,” said Canup. 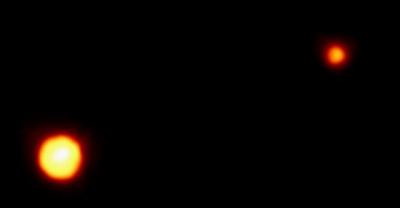 While the collision theory for both the Moon and the Pluto/Charon pair is not new, Canup is the first scientist to model the scenario successfully. Her work on Earth’s Moon indicated that an impact from a Mars-sized object could have produced it. This work accounted for both the iron depletion of our satellite as well as its mass and angular momentum.

Image: Pluto and Charon as viewed by the Hubble Space Telescope. Note the darker tint of Charon, indicating differences in surface composition. Also, note what may be a surface feature at the center of the Pluto image. Credit: Space Telescope Science Institute.

You can see an animation of the proposed Pluto/Charon collision here.

Sources: Canup’s work on the Earth’s Moon and its formation can be found in Canup, Robin M. and Erik Asphaug, “Origin of the Moon in a giant impact near the end of the Earth’s formation,” Nature 412, 708-712 (16 August 2001). Her most recent article on the Pluto/Charon simulations will appear in the January 28 issue of Science. It follows a series of earlier studies building the case for the collision hypothesis.