Via Wormhole to Another Universe?

Ask yourself this about extraterrestrial intelligence: are we more likely to detect it by picking up signals beamed to us from a species comparable to our own (at least in terms of intellectual capacity), or is it more likely that we’ll run across some kind of artifact from a far more advanced race? The movie 2001: A Space Odyssey posited the latter. The idea was that humans would make contact with a robotic probe left on the Moon by a Type III civilization. It was Russian astrophysicist Nikolai Kardashev who ranked advanced extraterrestrial civilizations by their energy consumption in the 1960s.

In fact, 2001 originally included comments by scientists discussing how such an event could occur and musing over the nature of advanced cultures (these were cut from the final edit, adding even more of a sense of mystery about what transpires). According to Kardashev, a Type III civilization is one that can work at inconceivably powerful levels, harnessing the energies of entire galaxies to do its bidding. And when the end of life is threatened by the ‘big freeze,’ as the universe continues to expand and temperatures plunge to near absolute zero, such a civilization might be powerful enough to find a way out, pushing its way into another universe. 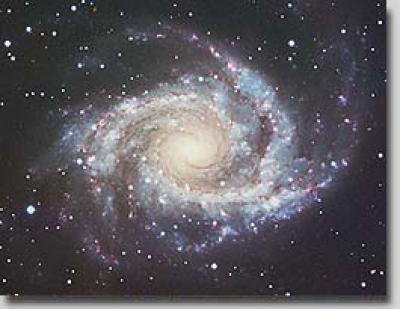 This is the kind of scenario that Michio Kaku develops in his new book Parallel Worlds: A Journey Through Creation, Higher Dimensions, and the Future of the Cosmos (New York: Doubleday, 2004). Kaku, a professor of theoretical physics at City University of New York, outlines the startling vision of a civilization saving itself by sending information through a wormhole into a parallel universe. On the other side, a nanomachine could be created that would use raw materials from any planet or moon to create millions of copies of itself. As the process continues, trillions of such probes could colonize an entire galaxy.

Image: The spiral galaxy NGC 2997. Could trillions of nanoprobes eventually colonize an entire galaxy like this one, saving a civilization from destruction? Image credit: Anglo-Australian Observatory.

Let Kaku explain what happens then:

Next, these robot probes would create huge biotechnology laboratories. The DNA sequences of the probes’ creators would have been carefully recorded, and the robots would have been designed to inject this information into incubators, which would then clone the entire species. An advanced civilisation may also code the personalities and memories of its inhabitants and inject this into the clones, enabling the entire race to be reincarnated.

You can read more of Kaku’s reasoning in Escape from the Universe, an article adapted from his book, available at the Prospect Magazine Web site Remarkably, the scenario does not violate what we know of physics. Kaku again:

Although seemingly fantastic, this scenario is consistent with the known laws of physics and biology, and is within the capabilities of a Type III civilisation. There is nothing in the rules of science to prevent the regeneration of an advanced civilisation from the molecular level. For a dying civilisation trapped in a freezing universe, this may be the last hope.

Centauri Dreams note: the ‘big freeze’ scenario emerges plausibly from data produced by the WMAP (Wilkinson Microwave Anisotropy Probe) satellite, which show that 73 percent of the matter and energy of the universe are made up of what we now call ‘dark energy,’ with 23 percent consisting of ‘dark matter.’ It seems to be this dark energy that explains the continuing and accelerating expansion of the universe. We have only begun the study of dark energy and dark matter, but if these numbers hold, then the ‘big freeze’ is very much in the universe’s future, a grim scene of stars exhausting their fuel and temperatures dropping to the point where molecular motion ceases. A spectacular survey of such a future can be found in Greg Laughlin’s The Five Ages of the Universe: Inside the Physics of Eternity (New York: Free Press, 1999). Both Laughlin and Kaku make for indispensable reading.