Construction of the world’s largest scientific instrument is proceeding in the frigid wastes of Antarctica. The initial deployment of what will become the IceCube neutrino telescope involved drilling a 1.5-mile deep hole into Antarctic ice, then installing 60 optical detectors in it that will detect the elusive particles. But that’s just the beginning: IceCube demands 70 such holes and 4200 of the volley-ball sized optical detectors. The final telescope will take up a cubic kilometer of ice and capture particles from the edge of the visible universe.

What makes neutrinos so interesting is their ability to travel vast distances without deflection or absorption; they seem to pass ghost-like through ordinary matter, and are unaffected by magnetic fields. “Neutrinos travel like bullets through a rainstorm,” Francis Halzen, a University of Wisconsin-Madison professor of physics and the principal investigator for the project explains. “Immense instruments are required to find neutrinos in sufficient numbers to trace their origin.”

And because neutrinos are associated with huge, violent events like galactic collisions and the formation of quasars, they may be able to tell us a great deal about the earliest days of the universe.

A University of Wisconsin article explains how IceCube works:

The optical modules that make up the detector act like light bulbs in reverse. They are able to sense the fleeting flash of light created when neutrinos passing through the Earth from the Northern Hemisphere occasionally collide with other atoms. The subatomic wreck creates another particle called a muon. The muon leaves a trail of blue light in its wake that allows scientists to trace its direction, back to a point of origin, potentially identifying the cosmic accelerators – black holes or crashing galaxies, for example – that produce the high-energy neutrinos. 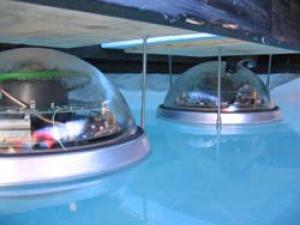 Image: A total of 4,200 digital optical modules or DOMs, designed to sample high-energy neutrino particles from deep space, are being deployed in 70 deep holes in the Antarctic ice by an international team of scientists, engineers and technicians. Funded primarily by the National Science Foundation, IceCube is being built by an international consortium of universities and scientific laboratories. Photo: courtesy Daan Hubert

Centauri Dreams‘ take: Tracking neutrinos to their source offers insights into the early universe unavailable through other forms of astronomy — even cosmic rays are deflected in their path to us by intervening matter and magnetic fields. But what a challenge: the hot-water drill system for IceCube by itself took 30 separate C-130 flights from McMurdo Station to the South Pole. With ten more holes and their associated detectors planned for next year, IceCube will one day emerge as a major player in our understanding of cosmology.