Storing and preserving living cells at low temperatures is a staple of science fiction. Who knows how many fictional interstellar journeys have taken place with the crew in cryogenic suspension (my favorite, Van Vogt’s “Far Centaurus,” springs quickly to mind, but there are many possible references). And with the possibility of Martian ice — even an ancient Martian sea — under observation by Mars Express, the question of life surviving in extreme conditions is drawing increased attention.

Which is why the discovery of of a new bacterium called Carnobacterium pleistocenium is so interesting. NASA astrobiologist Richard Hoover and his team found the anaerobic bacteria, which grow on sugars and proteins in the absence of oxygen, at the U.S. Army’s Cold Regions Research and Engineering Laboratory tunnel north of Fairbanks, Alaska. The tunnel was created in the 1960s to allow scientists to study permafrost as part of the preparation for building the Trans-Alaska Oil Pipeline.

Hoover’s bacteria not only survive at low temperatures, but can be frozen for long periods before being revived. The bacteria in the team’s samples had actually frozen near the end of the Pleistocene Age, making them tens of thousands of years old. The implications for life in other extreme environments are intriguing, to say the least. 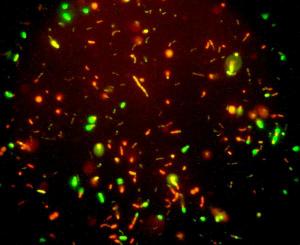 Image: Seen under a microscope, a new bacterium identified by NASA astrobiologist Dr. Richard Hoover and his colleagues thrives — despite having been thawed from ice dating back some 32,000 years, to the Pleistocene era. Living bacteria are stained green. Hoover found the specimens in permafrost deep in the U.S. Army’s Cold Regions Research and Engineering Laboratory near Fox, Alaska. The bacterium — identified over a period of years and published in January 2005 — is a never-before-seen “extremophile,” an organism that lives and thrives in conditions inhospitable to most life on Earth. NASA studies extremophiles to gain insight into the possibilities for life across the cosmos. (Photo courtesy of Asim Bej, University of Alabama at Birmingham)

“Astrobiologists ask, ‘Is life strictly terrestrial in origin, or is it a cosmic imperative, an undeniable, universal biological truth?’ That possibility is central to our desire to explore the universe,” Hoover said. “The existence of microorganisms in these harsh environments suggests — but does not promise — that we might one day discover similar life forms in the glaciers or permafrost of Mars or in the ice crust and oceans of Jupiter’s moon Europa.”

And as for the possible medical uses of this bacterium, Hoover has this to say:

“The enzymes and proteins it possesses, which give it the ability to spring to life after such long periods of dormancy, might hold the key to long-term, cryogenic — or very low temperature — storage of living cells, tissues and perhaps even complex life forms,” Hoover said.

Hoover and collaborators published their work as “Carnobacterium pleistocenium sp. nov., a novel psychrotolerant, facultative anaerobe isolated from permafrost of the Fox Tunnel in Alaska,” which ran in the January 2005 issue of the International Journal of Systematic and Evolutionary Microbiology (Vol. 55, pp. 473-478). You can read a NASA press release on their work here.