Cassini and the Naming of Names

Twenty-four craters on Saturn’s tiny moon Phoebe have now been deemed prominent enough to receive their own names. Phoebe was honored by the names of the Argonauts, the explorers who sailed with Jason to find the golden fleece; its largest crater has been christened Jason. The tale was known in the days of Homer and may have served as a pattern for the wanderings of Odysseus. It is most famously told in a four-book epic by Apollonius of Rhodes, one time custodian of the fabulous library of Alexandria.

“We picked the legend of the Argonauts for Phoebe as it has some resonance with the exploration of the Saturn system by Cassini-Huygens,” said Dr. Toby Owen, of the University of Hawaii at Manoa. He is the chairman of the International Astronomical Union Outer Solar System Task Group and an interdisciplinary scientist on the Cassini-Huygens mission. “We can’t say that our participating scientists include heroes like Hercules and Atalanta, but they do represent a wide, international spectrum of outstanding people who were willing to take the risk of joining this voyage to a distant realm in hopes of bringing back a grand prize”.

Thus the wonderful practice of astronomical naming continues (and think what a strain we’ll place on it when we get enough data to start naming all the exoplanets, and one day, surface features on them as well!) The naming of names (and yes, I’m deliberately invoking the Ray Bradbury story of the same name) is done through cooperation between the International Astronomical Union, the U.S. Geological Survey, and NASA. See the Gazetteer of Planetary Nomenclature for a database of planetary feature names. And you can read “The Naming of Names” in The Martian Chronicles, which has much to say about how names link people to places and gradually change them. 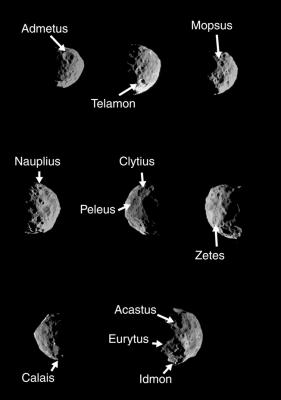 Of course, astronomical naming has to be practical as well as mythological. Thus names are chosen according to the legends surrounding the name of the object itself; when names run out, additional creativity is demanded. The result is a wonderful melange of ancient legends in often fascinating new combinations. Phoebe herself was a Titan, the daughter of Uranus and Gaea.

As for the satellite Phoebe, it is a small object (about 220 kilometers across), but now a more familiar one. “With the assignment of names to craters on its surface, Phoebe now joins the ranks of charted worlds” said Dr. Torrence Johnson, Cassini imaging team member at NASA’s Jet Propulsion Laboratory, Pasadena, Calif., who coordinated the naming of the Phoebe craters with the IAU.