On Propulsion, Dark Energy, and Humility

Exotic forms of propulsion like warp drives or journeys through wormholes often seem like pure fantasy. It was Harvard’s Edward Purcell, no stranger to the study of the cosmos through his work as a radio astronomer, who made the classic negative case: “All this stuff about traveling around the universe in space suits — except for local exploration which I have not discussed — belongs back where it came from, on the cereal box.”

But then humility returns and we realize how little we know. It would have astounded Purcell, as it astounds Centauri Dreams, to think that 70 percent of the universe is now considered to be ‘dark energy,’ the exact nature of which mystifies our greatest thinkers other than to say that without it, the universe would not be continuing to expand — and accelerating its expansion, at that. And, of course, another 25 percent of the universe is equally bizarre, the so-called ‘dark matter’ that seems to pervade the cosmos. 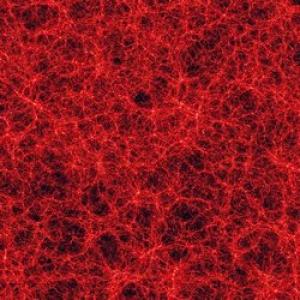 So our notions of interstellar flight have to take into account the fact that we have a sound working knowledge of only five percent of the universe, the ordinary matter we are all made of. We recently looked at Fabio Governato’s work on dark energy and a computer model his team used to model galaxy formation. As shown in the illustration, Governato views the universe as a sea of dark energy out of which galaxies emerge.

Image: A supercomputer-produced cross-section of part of the universe shows galaxies as brighter dots along filaments of matter, with a sea of dark energy filling in between the galactic islands. Credit: James Wadsley, McMaster University, Hamilton, Ontario.

Further information on Governato’s work can be found in this University of Washington press release. It’s fascinating stuff, and leads this writer to suppose that a universe aswarm with unknown energies might be one with serious prospects for advanced propulsion.

But not everyone is convinced about dark energy. A paper submitted to Physical Review Letters now argues there is no such thing; instead, the observed acceleration of the universe is the result of cosmological inflation. The authors, Edward W. Kolb (Fermi National Accelerator Laboratory, Chicago), Sabino Matarrese (University of Padova), Alessio Notari (University of Montreal), and Antonio Riotto of (Istituto Nazionale di Fisica Nucleare, Italy) are disturbed by the lack of a sound theoretical model to explain dark energy.

“If dark energy were the size that theories predict, the universe would have expanded with such a fantastic velocity that it would have prevented the existence of everything we know in our cosmos,” says Antonio Riotto.

Perhaps we need to return to the standard cosmological model. Inflationary theory posits that immediately following the Big Bang, the universe underwent a huge expansion, one that explains the apparent homogeneity of the cosmos. Such an expansion would cause ripples in spacetime that stretch beyond the boundaries of the visible universe. The development of these ripples over time, the authors believe, may account for the observed acceleration and does away with the need for dark energy.

“We realized that you simply need to add this new key ingredient, the ripples of spacetime generated during the epoch of inflation, to Einstein’s General Relativity to explain why the universe is accelerating today,” Riotto says. “It seems that the solution to the puzzle of acceleration involves the universe beyond our cosmic horizon. No mysterious dark energy is required.”

You can read more in a press release from the Istituto Nazionale di Fisica Nucleare. These are serious issues, yet the reader can be pardoned a certain sense of whimsy. What we are seriously discussing is whether seventy percent of the universe is made up of a bizarre force we cannot understand or is explicable by more ‘conventional’ models like inflation (which itself only emerged in 1981, and has now been confirmed by observations from the WMAP satellite).

Humility, anyone? No matter how these issues are ultimately resolved, Centauri Dreams opts for the notion that even the back of a cereal box may contain its share of mysteries. We are dwarfed by a universe we are only beginning to comprehend. Pushing into the bewildering world of dark energy is one more reminder that the final word is never spoken on any technology.