How does a moon that would fit within the state boundaries of Arizona manage to hold an atmosphere? That’s the question following Cassini’s most recent flyby of Enceladus. The spacecraft found magnetic field oscillations that scientists now attribute to ionized water vapor. The odd magnetic field signature has shown up on both Cassini flybys, the second of which, on March 9, came to within 500 kilometers of the Saturnian moon’s surface. 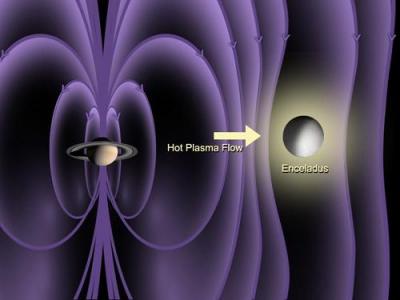 Because Enceladus is too small to hold an atmosphere for long, a continuous source of replenishment is suspected. The most likely candidate: volcanoes or geysers, which have been found elsewhere in the Solar System on Jupiter’s moon Io and Neptune’s moon Triton. “Enceladus,” says Dr. Fritz Neubauer, co-investigator for the Cassini magnetometer, and a professor at the University of Cologne in Germany, “could be Saturn’s more benign counterpart to Jupiter’s dramatic Io.” And ‘ice volcanoes’ could explain the remarkably high reflectivity of the moon as ice particles are continuously deposited on the surface. Enceladus reflects 90 percent of the light that hits it.

More on the Enceladus findings in this JPL news release.