Light from two planets orbiting other stars has now been directly detected by the Spitzer Space Telescope, in findings announced today at a NASA news conference. Spitzer scrutinized both planets using the ‘transit’ method, in which a planet eclipses its star and blocks a small fraction of its light.

The space-based telescope has been able to detect not only the primary transit but the secondary eclipse, occurring when a planet comes out from behind its star on the far side of its orbit. It thus became possible for astronomers to subtract the planetary ‘signal’ from the otherwise overwhelming light of the parent star, the first confirmed detection of the light from extrasolar worlds. 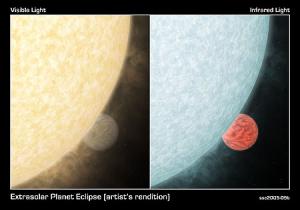 Both planets fall into the category of ‘hot Jupiters’ — massive worlds that orbit at extremely close distances from their primaries. The first (studied with Spitzer’s Infrared Array Camera) is TrES-1, orbiting its star at a distance of four million miles and boasting a temperature of 1340 degrees Fahrenheit. Spitzer was able to show that the planet’s reflectivity is 31 percent — the planet absorbs, in other words, most of the light that falls upon it.

Image: The artist’s concept above shows what a fiery hot star and its close-knit planetary companion might look like close up if viewed in visible (left) and infrared light. In visible light, a star shines brilliantly, overwhelming the little light that is reflected by its planet. In infrared, a star is less blinding, and its planet perks up with a fiery glow.

Infrared is a huge plus for detecting extrasolar planets, since in visible light a star outshines its planet by a factor of 10,000, whereas in the infrared the star is only 400 times brighter, making its light much easier to separate from any planetary companion.

“Planets like TrES-1 are tiny and faint compared to their stars, but the one thing they can’t hide is their heat,” said David Charbonneau of the Harvard-Smithsonian Center for Astrophysics (CfA), who led the team making the discovery. “We are like detectives. Previous clues told us the planet must be there, so we put on our ‘infrared goggles’ and suddenly, it popped into view.”

A second ‘hot Jupiter’ is HD 209458b, detected using Spitzer’s Multiband Imaging Photometer for Spitzer (MIPS) by a team under Drake Deming of the Goddard Space Flight Center. Interestingly, this planet’s shape seems distended, too large for its apparent mass. A previous theory, that this ‘puffy’ effect was caused by a non-circular orbit, has now been discounted, as both planets have been shown to follow nearly circular orbits. Each of the planets discussed today had been previously detected by indirect means (i.e., without observing actual light from the planets themselves).

Intriguingly, both stars in question are Sun-like. Two earlier claims for direct detections of planetary light (neither of which have been confirmed) involved other stellar types.

As for Spitzer, the future looks bright indeed. The study of planetary characteristics such as color, reflectivity, and temperature now comes into play. “We’ve caught our first ‘firefly,'” said Charbonneau. “Now we want to study a swarm of them.”