Tweaking Einstein on the Nature of Light

It makes sense to this former Midwesterner that Alan Kostelecky can compare light to waves propagating across a field of grain. After all, Kostelecky works at Indiana University, in a state where fields of grain are not so far from view. The theoretical physicist argues in research published online today in Physical Review D that we could consider light as the result of small violations of relativity, which compare not only to waving wheat but to “…a shimmering of ever-present vectors in empty space.”

Having seen my share of winds rippling across wheat fields, I know one thing: a propagating wave in a nearby crop comes with a sense of directionality. You know which way the wind is coming from, and how it’s affecting the local environment. Thinking of light in such terms is a far cry from a view with a much longer pedigree, that light depends upon an an underlying symmetry that is built into nature itself. 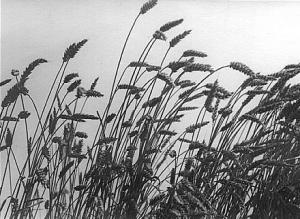 Think of symmetry this way: Spacetime in the Einstein model has no preferred or distinguishable direction; this proposition is known as Lorentz invariance. A break from the Einsteinian view would occur if, for example, an underlying energy field permeated the universe, allowing interactions with particles that created directionality, just as a magnetic field favors a particular orientation in spacetime. Another possibility: finding subtle differences in the behavior of matter and antimatter could undermine the presumed symmetry and suggest a deeper solution.

Kostelecky and co-author Robert Bluhm of Colby College say that light may indeed break such symmetry. “Nature’s beauty is more subtle than perfect symmetry,” Kostelecky said. “The underlying origin of light may be another example of this subtlety.” What relativity may provide is a highly accurate approximation of how the universe works, but perhaps not the final answer. Variations in relativity could be clues in the attempt to build a true unified theory.

If light is somehow creating tiny violations of Einsteinian relativity, how could such effects be tested? The authors answer that equipment from particle accelerators to atomic clocks may be able to tell us that there are asymmetries between some particles and antiparticles, and perhaps cyclic variations in their behavior dependent on the Earth’s rotation. Much experimental work lies ahead, and you can get details galore in a FAQ at Kostelecky’s Web site.

So is relativity wrong? Not any more than Newtonian physics is ‘wrong,’ the point being that each is valid within the parameters of the tests that have been devised to measure it. But studying odd effects around the edges can expand our view, just as oddities in the way stars shifted behind a solar eclipse in 1919 helped us to confirm an Einsteinian understanding of a previously Newtonian view of orbital mechanics. An article called “Is Special Relativity Wrong?” on the American Institute of Physics news site offers useful background.

A preprint of the paper “Spontaneous Lorentz Violation, Nambu-Goldstone Modes, and Gravity” can be found at the ArXiv site. See Kostelecky’s site for a useful page containing animations on the topic of breaking spacetime symmetries. A University of Indiana press release on Kostelecky and Bluhm’s recent work is here.