NASA’s Hubble, Spitzer and Chandra space telescopes will all be watching in July when the Deep Impact spacecraft releases its impactor module (about the size of a coffee table) into the path of onrushing comet Tempel 1. Deep Impact’s flyby module will be watching, too, as the impactor creates a crater that may be anywhere from two to fourteen stories deep, releasing cometary dust and ice and exposing underlying materials that have remained unchanged since the formation of the Solar System.

Now in the cruise phase of its flight, Deep Impact has been through a test of its autonomous navigation system, and its high gain antenna is operating nominally. A mission status report provides some details about the early stages of the flight, when critical subsystems were put through their paces:

Another event during commissioning phase was the bake-out heating of the spacecraft’s High Resolution Instrument (HRI) to remove normal residual moisture from its barrel. The moisture was a result of absorption into the structure of the instrument during the vehicle’s last hours on the launch pad and its transit through the atmosphere to space.

At completion of the bake-out procedure, test images were taken through the HRI. These images indicate the telescope has not reached perfect focus. A special team has been formed to investigate the performance and to evaluate activities to bring the telescope the rest of the way to focus. Future calibration tests will provide additional information about the instruments’ performance. 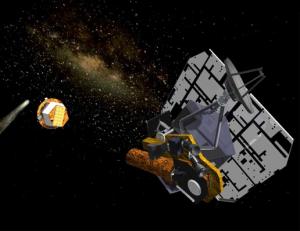 Aboard the spacecraft are a high-resolution camera and infrared spectrometer, a medium resolution instrument (MRI), and a duplicate camera on the Impact Targeting Sensor, all of which will record the collision between the impactor and Tempel 1. The two will collide at approximately 37,000 kilometers per hour (23,000 mph).

Dr. Michael A’Hearn of the University of Maryland, College Park, Md., added, “We are very early in the process of examining the data from all the instruments. It appears our infrared spectrometer is performing spectacularly, and even if the spatial resolution of the High Resolution Instrument remains at present levels, we still expect to obtain the best, most detailed pictures of a comet ever taken.”