Project Daedalus, a probe to Barnard’s Star that was the first complete design study of a starship, included among its other innovations a dust shield made of beryllium. Driven by a nuclear-pulse engine using internal confinement fusion, Daedalus was so large that its 50 ton shield (nine millimeters thick over a radius of 32 meters) represented only a fraction of its enormous payload. But it was a critical part of the design. For the Daedalus team realized that at 12 percent of the speed of light, an encounter with even a tiny object could destroy their vehicle.

Working in the 1970’s and made up of members of the British Interplanetary Society, the starship designers knew that most of the interstellar medium is gaseous, primarily hydrogen and about 25 percent helium. Dust is rare, no more than one dust particle for every trillion atoms, but the faster a spacecraft moves, the more stray protons and electrons it will encounter. At a significant percentage of the speed of light, such collisions can cause heating and the emission of bremsstrahlung radiation (caused by the sudden deflection of charged particles), creating the need to shield shipboard electronics. Moving through a field of interstellar dust could wreak even worse havoc. 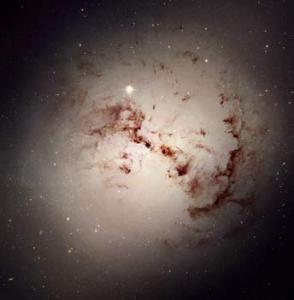 That such dust is an issue can be seen in the photograph. This is a Hubble shot of NGC 1316, an enormous elliptical galaxy that is filled with dust lanes. NASA likens these to ‘dust bunnies’ but they wouldn’t be a laughing matter to a fast moving starship as it transited such areas. These dust particles are tiny (usually less than a millionth of a meter across), and are made up primarily of carbon, silicates, ice and iron compounds. In the aggregate, they spell trouble for an interstellar probe.

And remember that entering a planetary system takes such a probe into even more hostile territory. The Daedalus probe would spend roughly 100 hours transiting the Barnard’s Star system, and its designers knew that the higher density of gas and dust particles it encountered there could doom the mission. Several proposals came from this, the chief being to create a cloud of dust artificially in front of the spacecraft, which would vaporize any particles Daedalus encountered. A particle projector in the main vehicle could create the cloud, or it could be produced by a secondary vehicle flying ahead of the probe during the brief hours of encounter with the star.

The Project Daedalus final report still makes for fascinating reading, though you need a good engineering library with back issues of the Journal of the British Interplanetary Society to find it. On the dust issue, the paper to read is A. R. Martin’s “Bombardment by Interstellar Material and Its Effects on the Vehicle,” Project Daedalus Final Report (JBIS, 1978): S116–S121. Alan Bond discusses the encounter shielding in “Project Daedalus: Target System Encounter Protection,” S123–S125 in the same publication.