Sky & Telescope is reporting that the purported planet around GQ Lupi may not be a planet but a brown dwarf. The magazine evidently draws this conclusion from a study of the paper by Ralph Neuhaeuser and colleagues that is to run in an upcoming issue of Astronomy & Astrophysics. “The newly released paper by Neuhauser and his colleagues suggests that the the object in question could be as much as 42 Jupiter masses. Brown dwarfs are, by definition, between 13 and 74 Jupiter masses,” the magazine reports. 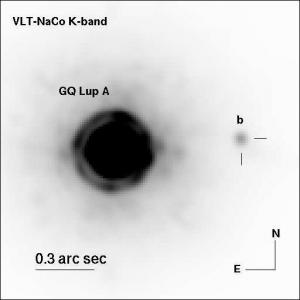 Meanwhile, data on the possible GQ Lupi planet can be found at the Extrasolar Planets Encyclopedia. The preprint of the Neuhaeuser paper, “Evidence for a co-moving sub-stellar companion of GQ Lup,” is available here. A key excerpt from the paper:

The most critical point in the mass determination of the companion (candidates) of GQ Lup and 2M1207 are the models, which may be off by an unknown factor for low ages (few Myrs); they need to be calibrated, before the mass of such companions can be determined confidently.

Sky & Telescope goes on to quote Ben Zuckerman (University of California, Los Angeles) on this point:

“The plus or minus 1 Jupiter mass seems like an incredibly tiny error bar to me,” he says. Noting that he has not yet seen Neuhauser’s paper, Zuckerman points out that the planet’s estimated mass must be based on theoretical models and the host star’s estimated age, both of which are fraught with uncertainty for such a young star.

Centauri Dreams‘ take: Zuckerman’s concerns seem valid, and he makes a further point that is telling: both star and ‘planet’ are young enough that they remain deeply enshrouded in a cloud of gas and dust, making calculations of the fainter object’s true luminosity difficult. Since such calculations affect the object’s mass estimate, it is too early to consider this a confirmed image of a planet.