The mystery of Sedna’s spin seems to be solved. The enigmatic Kuiper Belt object whose orbit reaches as far as 500 AU from the Sun (and as close as 80) appeared to have an unusually slow rotation rate when first observed. Some astronomers speculated that an unseen moon could be the cause, even though the best Hubble images showed no such object.

It has taken a set of new measurements by Scott Gaudi, Krzysztof Stanek and colleagues at the Harvard-Smithsonian Center for Astrophysics (CfA) to solve the mystery. Sedna’s rotation period isn’t the previously thought 20 days, but ten hours, which is consistent with other planetoids in the Solar System. The need for the missing moon has vanished. 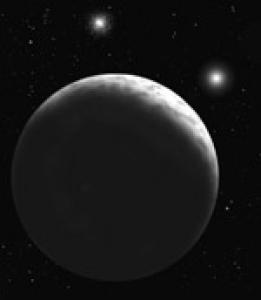 Not that Sedna doesn’t remain unusual. In addition to its highly elliptical orbit, the planetoid is one of the largest Kuiper Belt objects known, three-quarters the size of Pluto, or about 1,000 miles across. Another oddity: Sedna’s ruddy color, which remains unexplained.

Image: CfA astronomer Scott Gaudi and his colleagues have solved the case of Sedna’s missing moon. That distant solar system world (shown in this artist’s conception) spins more rapidly than originally thought, rotating once every 10 hours. Although Sedna is unusual in many other ways, its rotation period is normal, meaning that no moon is required to slow it down. Credit: David A. Aguilar (CfA)

From a CfA press release:

“Up until now, Sedna appeared strange in every way it had been studied. Every property of Sedna that we’d been able to measure was atypical,” said Gaudi. “We’ve shown that Sedna’s rotation period, at least, is entirely normal.”

The team used the 6.5-meter MMT telescope at Mt. Hopkins AZ to measure periodic brightening and dimming of the distant object, showing that earlier measurements had been in error. “The variation in Sedna’s brightness is quite small,” said CfA team member Matthew Holman, “and could have been easily overlooked.”

You can read a preprint of the team’s work, “On the Rotation Period of (90377) Sedna,” at the ArXiv site. The paper has been submitted to The Astrophysical Journal Letters for publication.

Next post: Gamma-Ray Bursts May Have Caused Species Extinction