Michael Murphy has been studying the fundamental constants of nature — numbers that are key to any given theory of how the universe works — for the past five years. His work at the Institute of Astronomy at Cambridge University has particularly foused on possible changes to the fine structure constant, a number central to electromagnetism, and therefore crucial to the interaction between light and matter. If its value were slightly different, life could not exist, although tiny changes over time could be tolerated.

Normally denoted by the Greek letter α (alpha), the fine structure constant can be worked out through experiment to great precision. According to Murphy, the numbers come to 1/alpha = 137.03599958, with an experimental uncertainty of a mere 0.00000052. But as the astronomer told the Physics 2005 conference at the University of Warwick (UK) today, the fine structure constant may have had a slightly different value in the early universe. 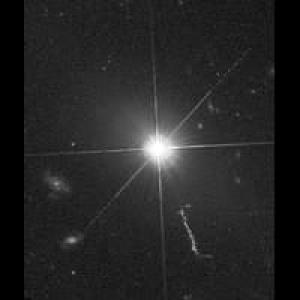 Murphy bases his conclusion on observations performed with the Keck 1 10-meter telescope on Mauna Kea (Hawaii). By recording the spectra of distant quasars as their light passes through intervening dust clouds, Murphy’s team can see how the light is absorbed and measure the atomic ‘fingerprint’ of the clouds’ atoms as they were ten billion years ago. These clouds are primarily hydrogen, but also contain traces of heavier atoms like magnesium, silicon, iron, nickel and zinc. A comparison between these spectra and comparable measurements here on Earth shows slightly differing wavelengths than expected. And because the appearance of these absorption lines is governed by the fine structure constant, Murphy believes he is seeing changes in its value.

Image: The Hubble Space Telescope’s Advanced Camera for Surveys (ACS) has provided the clearest visible-light view yet of the nearby quasar 3C 273. Can light from such objects help us find cracks in physical theories previously thought solid? Credit: NASA and J. Bahcall (IAS)

…our results have the potential to revolutionise the way we understand the universe on all scales, from the subatomic to the universal. All of modern physical theory is based on the assumption that the laws of physics remain the same no matter where or when you happen to be. Physicists have what is called a “standard model” of the universe which allows them to explain all observed phenomena. This standard model cannot explain variations in the constants and so, if our results are correct, the standard model would need a complete overhaul: we will have discovered the first hint of a completely new set of physical laws, hitherto unseen and not to be understood for some time.

Ahead for Murphy is work with a new dataset from the Very Large Telescope in Chile. But he believes that a different type of experiment is needed to confirm the work. Possible candidates: measurements of fluctuations in the cosmic background radiation, or measurements of the abundance of elements in the primordial universe. In each case, obtaining results with the needed precision may be some years away, so what we are dealing with is a suggestion of a changing constant that could force us to reevaluate our knowledge of fundamental physical laws.

Centauri Dreams‘ take: Work like Murphy’s underlines the need for NASA to reconstitute its Breakthrough Propulsion Physics program. While the chance of major breakthroughs in a short timeframe is slight, the point is that a modest investment in continuing research allows us to examine the puzzling anomalies around the edges of known theory that may — or may not — point to further physics in need of understanding. Until we comprehend the connection between gravity and quantum mechanics, we should assume a new set of physical laws remains to be discovered, with ramifications we cannot anticipate.

For more, see the article “Are the laws of nature changing with time?” in Physics World. For Murphy’s recent work, see the paper “Limits on variations in fundamental constants from 21-cm and ultraviolet quasar absorption lines” at the ArXiv site. An exhaustive list list of publications from Murphy and team is here.

Next post: Voyager and the Benefits of ‘Slow Science’