Extremely Large Telescopes and the Hunt for Terrestrial Worlds

How large can a telescope get? Today’s largest optical telescopes boast 10-meter mirrors (33 feet across). But the recent Royal Astronomical Society meeting in Birmingham (UK) heard the case for much larger instruments, on the order of 50 to 100 meters (165-330 feet) in diameter, optical instruments the size of the Deep Space Network’s largest antennae. Moreover, such instruments would have as much as forty times the spatial resolution of the Hubble Space Telescope, though operating deep within Earth’s atmospheric well.

European astronomers have been engaged in this study for the past four years; you can see a synopsis of their work in an online brochure called “Extremely Large Telescopes: The Next Step In Mankind’s Quest For The Universe” (PDF warning). The conclusions of their report are remarkable:

The vast improvement in sensitivity and precision allowed by the next step in technological capabilities, from today’s 6-10 m telescopes to the new generation of 50-100 m telescopes with integrated adaptive optics capability, will be the largest such enhancement in the history of telescopic astronomy. It is likely that the major scientific impact of these new telescopes will be discoveries we cannot predict, so that their scientific legacy will also vastly exceed even that rich return which we can predict today.

The key here is that the spatial resolution of a telescope improves in proportion to its diameter. For that reason, Extremely Large Telescopes (ELTs) will be able to join space-borne missions like Terrestrial Planet Finder in an active search for Earth-like planets, and should be able to analyze the makeup of their atmospheres. The report estimates that a 30-meter telescope equipped with adaptive optics should be able to study Jupiter-class planets around stars tens of light years away. A 100-meter telescope would be able to detect Earth-like planets around stars as far as 100 light years away, within which confines are located roughly 1000 Sun-like stars.

Dr. Isobel Hook of Oxford University told the RAS meeting that a 50 to 100-meter telescope could be built within 10 to 15 years for a cost of about 1 billion Euros. A major design study is now beginning in Europe to develop the technology needed to build such telescopes. For its part, the European Southern Observatory has been working since 1997 on the OWL (Overwhelmingly Large Telescope) feasibility study, which is expected to be completed by the fall of this year. OWL would be the mother of all ELTs, a 100-meter telescope that would be capable of detecting life-bearing planets around other stars. 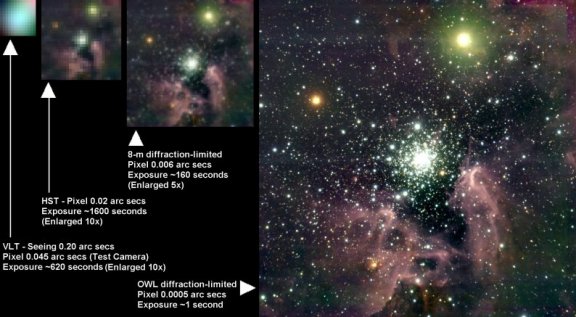 Centauri Dreams‘ note: Space-based and ground observatories are both necessary no matter how efficiently Earth-based telescopes can gather light. Space telescopes can work with x-ray and infrared wavelengths that are absorbed or blocked by the atmosphere. Adaptive optics do wondrous things in compensating for atmospheric blurring, but they can only get you into the near-infrared, leaving a wide range of observations to their space-based counterparts.

Two curves are converging here. First, we are at a point where the advantages of space telescopes are mitigated by their cost and the difficulty of maintenance, as the Hubble instrument has so graphically demonstrated. The second curve follows the cost of ground-based instruments and weighs their feasibility as mirror sizes continue to increase. At some point, our space-based infrastructure should be flexible enough to operate instruments in space that will eclipse even the best forseeable ground telescopes at all wavelengths — and at lower cost — but that day may be decades away.

Next post: Oort Cloud Explorer: Fast Mission to the Comets

Previous post: Voyager and the Benefits of ‘Slow Science’